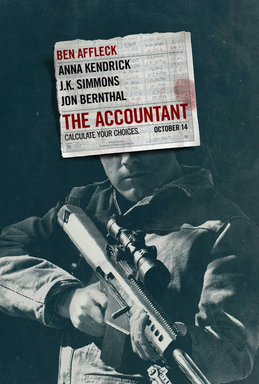 (SPOILER ALERT: Great chunks of key plot elements given away here.)
Customarily in a Hollywood film, mental aberration, serious or otherwise, is dealt with from a Freudian perspective (or it could be from a cod Freudian perspective!) in which aberrant behaviour or feelings are caused by infantile trauma which is resolved by catharsis.That catharsis is usually the climax of the film or the immediately preceding event which enables the protagonist to overcome the final hurdle of his tests, the tests being in accordance with the "hero's journey" theory on successful films. Hollywood must be the last refuge of the viability of Freudian psychotherapy which has been universally disdained by the medical/psychiatric profession. There may be some lingering hold with psychologists, although as to that, Woody Allen with his lifelong adherence to analysis might be a better guide than this writer.

The protagonist of this film is Christian Wild (Ben Affleck) a high functioning – indeed a very high functioning – sufferer from Asperger's syndrome. Introduced as a deeply troubled and non-verbal child he is on the one hand nurtured by a caring mother and visited with "tough love" from a demanding but nonetheless very caring father who is an officer in the US Army. The father, in my view rightly, insists that his son cannot be allowed to remain cocooned in his own silence and forces him to interact with the world. As an adult Christian is a mathematical genius practising as an accountant with a profitable sideline in laundering money for mafia gangsters. There is not so much as a whiff of condemnation about his sideline.

Mr Affleck is almost impossibly good-looking so it's a relief to most males watching this film (it is quite clearly an actioner excessively seeking out a young male audience) that he has no sexual or emotional interests with any female (not live ones anyway). Oops, almost forgot to mention that he is a crack pistol and rifle shot, has the killing ability of a comic ninja and is superfit, courtesy of the nebulous career of his father who appears to have been in some sort of "black ops". Whatever requirements daddy may have had as to secrecy for his employers, he makes the best training and facilities available for Christian and his younger brother.

I don't think I can recall seeing a film in which so much of the first couple of acts was spent nailing one hook after another into the wall of the plot, so that it was not so much a matter of following the plot, with or without interest, as it was seeing how quickly one could recognise the relevance of this or that hook. I'm pretty sure every possible point was covered subsequently so that one could mentally refer back to some hook referred to prior. That part was I suppose quite clever. The obverse and downside is that with these multiple hooks made so manifestly clear as "hooks", one could spend much of his time predicting the plot and this necessarily discourages drama.

My language above may indicate some disdain for this film but for what it is, rather than for what it might purport to be, it is entirely worthwhile. Production values are exemplary, Mr Affleck in particular acts well in a role without much in the way of demands. There are other well-known actors involved, but they could scarcely be considered "characters", capable of deep characterisation. Instead they are just straw men. Once the curtain came down I would not have given the film another moment's thought although over coffee my companion at the movie asked for virtually a blow by blow account of the plot and mentioned, probably correctly, that the interaction of the personal – the travail of the protagonist with his particular mental illness and the second plot, concerning the Department of Treasury trying to find out the protagonist's whereabouts and his involvement with crime, is probably too complex for the average viewer.

Ultimately this is a masturbatory fantasy. The weak boy with glasses (indeed the youthful Christian is shown as such) becomes not merely highly intelligent but wealthy as a consequence of his intelligence, is fantastically fit and handsome and a ruthless killer of his enemies.

Given what I've said in the first paragraph of this review, the normal trajectory would be the breaking down of Christian' s emotional barriers to embrace an emotional relationship with some female in the film. This is hinted at but doesn't transpire and instead he is last seen driving off into the sunset and recasting himself with yet again another new identity. There have been multiple such in the past and he has adopted the names of the major mathematical genius is of history. At least the ones with a Christian name and surname. I suspect he would never have called himself Pythagoras! Possibly this gives the producer and director the opportunity of a sequel. I hope not.