Folks, this is really something to celebrate so I'm giving plenty of early notice. GOMA in Brisbane proposes to present in February 2017 a season titled Lost Cinema: Queensland Discoveries.  GOMA's website can take over here and note that the season showcases a collection of international films that have recently been rediscovered in Queensland, having been previously considered lost forever.
Joel Archer, a Sunshine Coast-born lover of early cinema, has actively searched old theatres, sheds and houses across Queensland in the hopes of finding forgotten film prints. His diligence has led to the rediscovery and preservation of four silent films previously considered lost: two short films from Italy (Attilio Fabbri's The Redeeming Angel 1913 and Roberto Roberti's Prisoner of the Owls 1913), a German feature film directed by Ernst Wendt (The White Desert 1922), and Oscar-winning director Lewis Milestone's first American feature film (Seven Sinners 1925). 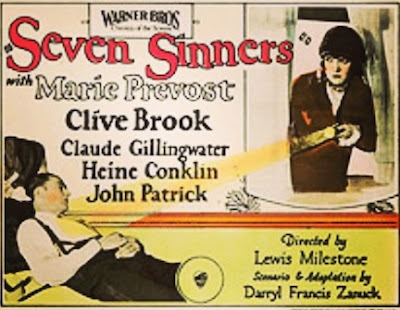 More information is on the GOMA website if you click here. These screenings will feature live musical accompaniment by David Bailey on the Gallery's 1929 Wurlitzer organ.
This program features the world premiere of the restoration of Seven Sinners 1925, presented in partnership with the Academy Film Archive who undertook its careful restoration.
IN CONVERSATION
11.00am 05 February 2017 - Free, no bookings required
Join us for a conversation with Joel Archer to hear about his lifelong love of early cinema and his hunt for lost films in townships across Queensland.

PS Avid readers with good memories will call that the news about Seven Sinners  and the others was given some coverage on the Film Alert blog which you can find if you click here. You can also find some information here about the wildly film enthusiastic Joel Archer whose sleuthing it was that uncovered these treasures. Click here to refresh on the background.

I don't know whether there will be other screenings organised including screenings outside Queensland. Sydney has no facility or institution to replicate GOMA's initiative.