HACKSAW RIDGE - Mel Gibson back to repeat his trope...

The violence in Hacksaw Ridge befuddles you. It shouldn’t really. Only a quick moment’s reflection reminds you that, putting aside all those Lethal Weapon movies in which Mel Gibson played the clown, all of the films Gibson has directed have been loaded up with the most primitive depictions of violent and war-like behaviour. The relish with which it's shown is Gibson's way of drawing attention to himself. 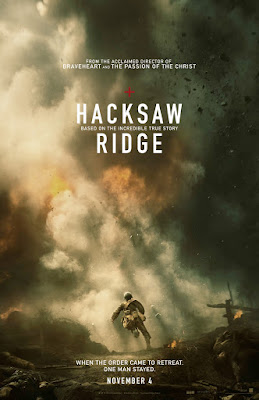 Hacksaw Ridge excels largely because the technology of putting war on screen continues to advance and the special effects work involving heads and bodies mashed up by bullets, mortars, hand to hand fighting, exploding vehicles and so on is so graphic. Whether this will be seen by audiences as a nice night’s entertainment I have my doubts.
That graphic violence aside what struck me most about the film is the old-fashioned look and the old-fashioned way of telling the story. I started thinking that Gibson might be trying to emulate Samuel Fuller or even Robert Aldrich  from way back when but more and more the film kept slipping  backwards into the ‘look’ of some mid-50s Fox widescreen epic, ponderously directed, scripted by literalists afraid to let an obvious moment go by. The work of Henry King,  Nunally Johnson and others springs to mind, all going hell for leather for overblown ‘realism’ at the behest of Darryl F Zanuck.

You know of course that, in the manner of 50s Hollywood war pictures the suffering US GI is going to triumph in some way or other and then, the modern movie kicks in, we’ll round it out with photos of the actual cast members. The predictability level is well, high.

For this, an American film made out here for tax-minimisation reasons but with sufficient Australian input as to qualify as an ‘Australian film’ in the manner of The Great Gatsby, Knowing, Moulin Rouge, Charlotte Gray and others, the next certainty is that the film will be voted Best Picture by whomever it is that decides the AACTA Awards. This occurs almost as a piece of mechanical engineering – the ‘biggest’ picture of the year, wins that gong. Good luck to them I guess.

But there is one final mystery to be solved. We are told that at the end of the screening in Venice, the audience gave the film a ten-minute standing ovation. Incredible. …but I guess you had to be there and check for yourself that the crowd didn’t do what it mostly does, start to file out when all those credits got rolling. Nope, we are told it is at least implied and reported on the record. I cant see it happening at the Ritz Randwick in a week or two but further reports welcome.
Posted by Film Alert 101 at 21:57