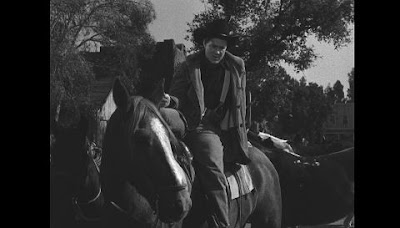 Ben Johnson (left, click to enlarge image) in his first "major" (non stunt) role for Ford opens wide as the town's alpha males sniff him out like dogs circling the new pack in the second sequence of my favorite Ford of all time, Wagon Master.

The screen is from a new Blu-ray from IVC Japan, one of a dozen or more RKO titles curated from that label by Serge Bromberg and Lobster FIlms who own the non US rights to the RKO library. It has to be said while this is wonderful to have in HD the video sources held by Lobster from RKO are never going to equal a properly mastered rescan and 2K remaster from Warner and its incomparable MTI facility in Los Angeles. In the meantime however this is one of those major cinephilic titles, like I Walked with a Zombie and The Fugitive which don't have any hint of a home base 2K resurrection from the Warner Archive label in the foreseeable future. The transfer from IVC is nice without being stellar, and while black levels are less than pitch as they are in all the IVC RKO titles so far, contrast and detail are good, and the image has natural film grain quality and sharpness. Maybe one day something better will come along.

Wagon Master is surely Ford's most apparently spontaneous movie, opening as it does with the credits and Hageman's theme music playing right over the inexorable westerly (right to left) movement of a Wagon Train announcing the movie's debut, but with one brief interruption by the train's dog who wanders momentarily out of the visual plane of the train screen forwards to briefly acknowledge and sniff Bert Glennon's camera, and then barks approval as he rejoins the line of the train. Every actor of the dozen or so leads, all wonderful has moments in the movie which evoke almost reckless improvisation and such sheer joy at the seeming realization they are participating in this greatest of collaborative movies. Ford's tendency to introduce characters as archetypes or even thumbnail satires is here often extended into full movie length characterizations to the point where a character like Joanne Dru's charming and beautiful "Denver" gets her big tipsy climactic scenes very late in the piece during the magnificent choreography of the campfire sequence in which most of the narrative's strands coalesce. In the process she gives us one of the best drunk scenes in Fordian cinema, with humor to spare.

Ford's absolute control of every element and detail down to the improvisatory quality of performance and timing is so total that many so called serious critics who otherwise overpraised some of his more literary adaptations like The Informer or Tobacco Road have failed to see the true spirit of Fords' genius here in all its Shakespearean glory. I was going to call the movie Jonsonian, but the collision of that name with Ford's new leading man's and his ascension to the Fordian galaxy is probably too cute.

Up till Wagon Master Johnson served his time for Ford as a major stuntman and double, with some bits, along with Yakima Canutt, indeed he did most of Wayne's riding wide shots and stunts for She Wore a Yellow Ribbon among others. According to reports Ben Jonson was terrified of Ford on set. Ford was known for tyrannical behavior towards his actors, but the results paid off and Johnson's easy, incredibly sexy, casual authority is one of the great star debuts in Ford, surely a worthy successor to Wayne's first big Close Up in Stagecoach.
Posted by Film Alert 101 at 05:44