The image below, swiped from online galleries, is a very pale reflection of the astonishing, unbelievably beautiful transfer executed by Universal for this staggering new disc, from their most recent 2018 4K master (from 6K workflow ex the 2002 Harris/Katz 65 mm photochemical restoration) of Vertigo. I am like almost everyone reviewing still unable to capture, rip and extract frames from UHD 4K discs, so I fear one has to rely on words alone to deal with this amazing set. 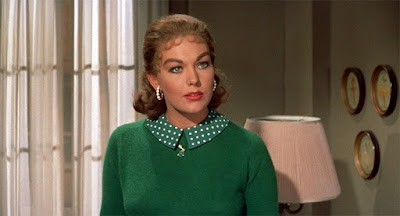 Basically it's this. The picture quality is simply the most beautiful color film image I've ever seen, in any format or venue, displayed in what is effectively the highest resolution source with the highest possible grading for tone, white and black levels, depth, gamma and shadow detail and a simply unbelievable color gamut in which a basic primary like green (a constant theme throughout the film) is photographed with what looks like an endless range of color tonalities garnered from the DP's lighting and its reaction to film emulsion. Even a shot of something like the rear steel tail fins of Scotty's white De Soto convertible is photographed with a momentary, almost hallucinatory flashing as the car moves off to continue tailing Madeleine which DP Robert Burks picks up in just a few seconds of film.

I have literally never seen this before in what must be two dozen or so viewings of Vertigo. I don't believe even 35mm IB reduction prints originally printed by Technicolor in the fifties could have matched this. The two scenes usually attributed to "fog filter" effects - Scotty shadowing Madeleine at the graveyard, and Judy's emergence in the final act with her hair remade, stepping out of the bedroom to become Madeleine again - take on a clarity which makes every previous rendition of these two sequences look technically inadequate. Both sequences retain both Novak's eerily surrounding foggy "aura" within a totally naturalistic, albeit hyper-colored live action setting.

The box comes at the frankly astonishing price of $60US for the four titles in both UHD and standard BD discs. So for an outlay of 15 bucks you get what is in essence a lossless port of the new 4K DCP of each of the four movies which you can endlessly play and view in your own home.

I don't want to even waste more words trying to detail the pleasures of the other pictures. I do think this set represents a turning point for the medium of 4K home viewing and the way it addresses cinephile viewers, not only collectors and other mad people like me. If there is anyone out there who's tinkering with the idea of upgrading, or who is tired of wondering how to spend all that retirement pension money on something better than lifestyle books during lockdown, think hard about going down this path.

And if you do, I implore you to make this box your first purchase. Life is too short to waste on viewing unworthy transfers or prints of great movies. This is the highest possible level you can go. And if it's strong enough to compel me to re-assess Vertigo after several decades of doubter status, it can only be something as outstandingly beautiful as this new 4K.

This all comes unfortunately at a time when Home video formats are dying off, in the wake of endless streaming services whose image quality, even in so-called 4K varies from good (Netflix 4K Dolby Vision) to total shit (Disney HV, with its impossible bandwidth constraints.) And to further assist in killing off the now forty-year history of Home Video, the advent of the planet's latest plague, whose effect on staffing and work arrangements at the majors has led to earlier rumors that Universal, who have just released this groundbreaking box, had suspended all their restoration work after what is now seven or eight years solid of a massive overhaul of their own deep catalogue. They haven't fortunately but it's all danger zone from here for Home Vid.