Soon to be on UHD - David Hare rejoices at the prospect of new restorations of Hitchcock's REAR WINDOW, PSYCHO, VERTIGO and THE BIRDS 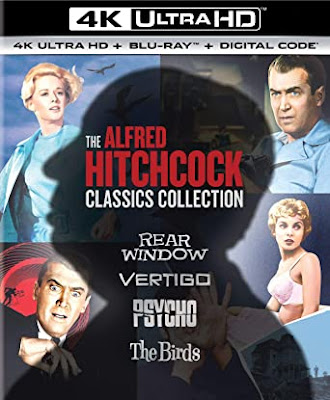 This new UHD boxset has just been Okayed for order to OZ and NZ from streetdate September 7. (Which supposes Universal Oz will not be releasing it re-packaged here as they used to do wth UHD). To order from Amazon click on this link
Same thing has happened with the UHD Spartacus  which shipped today. I have once again gone with the super expensive DHL option (including 20% GST for NZ!) but having just recently received two of the seemingly lost-for-months standard Amazon and ImportCD cd orders from Jan and Feb recently ariving here from the Covid blackhole, I suspect regular airmail is now less predictable.

I hope this boxset flies off the shelf, and they do yet more including a rescanned and remastered Marnie  to replace the DNR'ed jagged edged sharpened horror Blu-ray from the 2012 box which looked like it was shot through mosquito gauze.

The Birds footage in the two short extracts is eye poppingly spectacular and reveals a brand new transfer, millions of miles ahead of the waxy, soft, overly filtered mess that Universal did for the title in its big 2012 masterpiece Blu Ray box.

Universal's work 10 years ago and now are from two parallel universes, the latter a winner. These new UHD Hitchcock discs promise to be very, very special indeed.
Posted by Film Alert 101 at 06:55