Editor's Note: A bit of a shock this but the timing is probably perfect. Leaving at the top of her game after directing Australia's major film festival with grace and distinction. 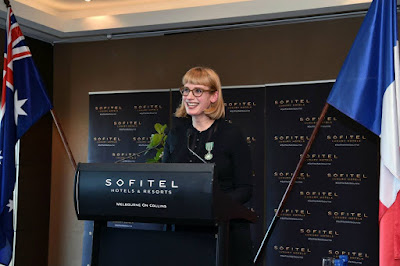 Some news!!
Danny has a job in Germany (he will post separately about it – I don’t want to steal his thunder) and so we are moving there later this year. I have been meaning to tell many of you individually but haven’t been online so much the past few weeks.
So this will be my final MIFF this year. I know I will be sad to leave this festival that has become my family, my life, the last ten years, but I am also excited about what the future holds.


I want to leap into the void with abandon, without fear (though some fear is good, and I have plenty!) and with an open mind. And with my two heroic co-pilots, Danny and Alex, by my side.
I’m excited to be back in Europe and will be reaching out soon to many of you for opportunities and catch ups. Time for the left brain to tower above at the right.
We are here right now – in Frankfurt, also heading to Paris, Brussels, Oberhausen and of course Cannes in the coming weeks. I’ll be back in Melbourne later in May to do my last MIFF. And I am so excited to come back to work.
Oh and – hey! – how about baby jetlag? Now that is some DAMN FINE STRONG STUFF! Alex is being such a trooper, can’t imagine what he must make of it all.
Posted by Film Alert 101 at 01:17