For a long time Sydney’s supercinephile Barrie Pattison has sent me emails from the address mozjoukine@something or other.com.au (Address disguised to protect the innocent).

Mozjoukine. My curiosity was regrettably not piqued. Then I met David Meeker in Bologna, an old BFI hand with an elephantine memory and a certain sense of nostalgia. “Is Barrie Pattison still alive?” Meeker enquired. “I remember him”.

“Indeed” I said. He sends me material that I publish on my Film Alert 101 blog. “Would you like to contact him?”

“No, just curious” said Meeker who then thought it was very amusing that Barrie had an email address “Mozjoukine”.

“Who is Mozjoukine?” I said, thus displaying a degree of ignorance that inevitably caused silent eye-rolling from the pom I was having a coffee with. “Look him up”.

Ivan Mozjoukine was a Russian who made films in pre-revolutionary Russia. Wikipedia tells us he launched his screen career with the 1911 adaptation of Tolstoy’s The Kreutzer Sonata. He also starred in A House in Kolomna (1913), thedrama Do You Remember? opposite the popular Russian ballerina Vera Karalli (1914), Nikolay Stavrogin (1915), The Queen of Spades(1916, after Pushkin) and other adaptations of Russian classics.

Cinephiles and even scholars may not have seen these films but many will have seen Mozjoukine in one of the more famous moments of film theory.

On his blog Observations of Film Art David Bordwell describes it thus: “Kuleshov’s most famous experiment, the one he identified with the “Kuleshov effect” proper, involves a stock shot of the actor Ivan Mosjoukin, taken from an existing film. In his writing he’s rather vague and laconic about the results.
I alternated the same shot of Mosjoukin with various other shots (a plate of soup, a girl, a child’s coffin), and these shots acquired a different meaning. The discovery stunned me—so convinced was I of the enormous power of montage. (1)
Kuleshov’s pupil the great director V. I. Pudovkin offers a different description of the shots: a plate of soup, a dead woman in a coffin, a little girl playing with a teddy bear. He also goes farther in reporting how the audience responded. People read emotions into the neutral expression on Mosjoukin’s face.
The audience raved about the actor’s refined acting. They pointed out his weighted pensiveness over the forgotten soup. They were touched by the profound sorrow in his eyes as he looked upon the dead woman, and admired the light, happy smile with which he feasted his eyes upon the girl at play. But we knew that in all three cases the face was exactly the same.”
Now you know.
Mozjoukine was one of those who fled from Russi after the revolution in 1917. One of that number producer Alexandre Kamenka set up  the Société des Films Albatros Paris in 1922.
Among the group of Russian artists who stayed to work with Albatros were the directors Victor Tourjansky and Alexandre Volkoff as well as Mozjoukine and Mozjoukine’s wife Nathalie Lissenko.
Wikipedia informs us, and I must confess I am a little skeptical about some of this, Kamenka's production policy combined prestige projects with openly commercial films, and his consistent record made him the most successful French producer during the 1920s, according to Charles Spaak. … The arrival of sound pictures posed a serious difficulty for Albatros which had hitherto relied considerably upon Russian actors, especially Mozjoukine whose accent precluded a successful transition into the talking era.
The company's output diminished in the 1930s, but it achieved one further artistic success of note when Jean Renoir  joined them for his 1936 adaptation of Gorky's Les Bas-fonds  By this time, Albatros was the longest surviving film company operating in France (surely not given Gaumont's existence! Ed) but with the outbreak of World War II, Kamenka wound up the company which had remained particularly associated with silent cinema.
But back to Mozjoukine..
House of Mystery
It wasn’t until I read Kristin Thompson’s review of Flicker Alley’s splendid DVD of Alexandre Volkoff’s House of Mystery  that my Mozjoukine interest got a kick start. For the whole quite lengthy review you can click here.
These introductory paras set the scene: “Nearly two years ago, when Flicker Alley released its wonderful collection of French films made by the Russian-emigré production company Albatros in the 1920s, I wrote, “Now, if Flicker Alley will manage to release its long-rumored project, Albatros’s 1923 serial, La Maison du mystère, starring Mosjoukine, we will all be doubly grateful.” That release arrived yesterday.
"For decades, La Maison du mystère remained one of the fabled lost films of the silent era. It was an enormous popular success upon its release in 1923, and critics praised it as well. Even Louis Delluc, who high-mindedly promoted cinema as a realistic, restrained art, grudgingly said of it, “La Maison du mystère is a serial. They are a necessity. So be it. This one is intelligent, sober, frank, genuinely human.”

And yes, Kristin is her usual acute self in praising this remarkable DVD, and its restoration. The first sighting of Mozjoukine, at least knowing he was Mozjoukine, was electric. The story, a six part serial rolled along with some quite extraordinary visual fireworks, none more so than the wedding scene shot entirely in silhouette.

Since then Bologna has screened Mozjoukine’s Kean  which the actor plays the famous Shakespearean and which I wrote about here  and The Loves of Casanova,  again directed by Volkoff. Beautiful 35mm copies supplied by the Cinematheque francaise

Now, a new addition to the long trackdown that is still years from completion. A DVD of Le Brasier Ardent  directed by Mozjoukine himself in a splendid copy of a restoration. Mozjoukine never directed again after this one though his acting career went on for another dozen years.
This is quite something. Clearly influenced by all manner of artistic movements that swirled through the first quarter of the 20thcentury it opens with a long dream sequence of a woman tormented by fire, veers off into a visit to a bizarre private detective agency before finally settling into a will she (leave her husband) or wont she. She’s leaving the husband for the man of her dream who has also played the detective Zed. Mozjoukine plays much for laughs and his large doe eyes and round nose make him a genuine romantic object. 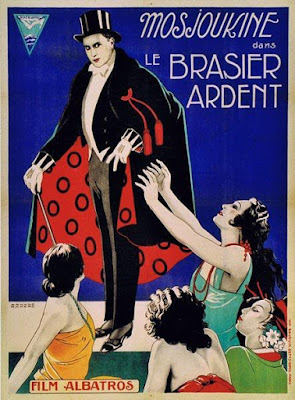 The copy I watched obviously came from some backchannel source. The soundtrack was synthetic, a cobble together selection of music, the occasional inappropriate song and even the zither theme from The Third Man.

Onto Bologna. Maybe there will be more. And onto to the Flicker Alley collection of Albatros classics referred to by Kristin above. I don’t know what kept me back….

….and pardon the various spellings of the name. Russian doesn’t seem to transliterate universally.
Posted by Film Alert 101 at 04:46