To pop-psychologise myself, living mainly in Greece from the years 2008-2017 has probably radicalised me, adding an edge to my already-established commitment to all things indie film. When you see poverty and oppression in a country, and then the respective responses of community and resistance, you get invigorated.  You come back to your own country “refreshed” as it were.  So 2018 has been like a new beginning for me, with my activities in Australia, promoting Australian indie/underground cinema.
But it’s not just me. It’s in the air.  There are cracks in the walls of the monolithic capitalist beast in Australia.  After all, just how far can an economy balloon?  How much can one tolerate establishments that seem to revolve solely around money and vested interests?  In prosaic terms, why do festivals like the Melbourne International Film Festival continuously refuse to play any films that are self-funded? This never used to be the case, but in the last 10 years Australia has become more conservative, and more and more obsessed with money.
Some of us have had enough of this.  There are rumblings.  In the last few years, culminating in a flurry of activity in 2018, there has been a lot of movement outside the parameters of the established organisations. The money-men (and women) have been failing cutting-edge cinema (and also cutting-edge film culture in general), but a critical mass now seems to have been reached, where these outsiders are now pushing through, into activity and exposure.  DIY screenings, printed zines, podcasts, websites, articles in the mainstream media, new venues, and even one of the major film festivals (the Adelaide Film Festival) programming several no-budget films.
A lot of it stems back to the smaller city of Adelaide, to 2014, when two passionate individuals, Mike Retter and Chris Luscri, decided to create a festival of vertical films (i.e. 9:16 aspect ratio, like iphones have).  From there, Retter has made a couple of features in 9:16 (and the radicalness of that cannot be under-estimated), run his podcast Meat Bone Express, and made his zine Cinema Now, whilst Luscri has relocated to Melbourne, run indie film screenings at Artist Film Workshop, and his own podcasts, and been involved in many indie film productions, in various roles.
I myself have been living in Adelaide since returning from Greece (rather than my hometown of Melbourne), and in 2018 I launched the website Pure Shit: Australian Cinema, ran various screenings at Long Play Cinema & Bar in Melbourne, and initiated a programming stream called “Australian New Wave filmmakers”(composed of films made completely without any funding), curating and presenting sessions of it for the Adelaide Film Festival in October (a shout-out to programmer Mat Kesting here), and then Long Play in Melbourne in November.
I’m not the only one to hire Long Play for indie screenings either, and kudos to the venue for keeping their hire fee completely within reach of filmmakers’ budgets.  And Artist Film Workshop also continued running their own screenings, separate to Chris Luscri’s programming for them.  And established groups like Melbourne Underground Film Festival and West Side Shorts also kept doing their thing, in 2018.
A special mention to a new venue, in Adelaide again, called Sax & Violins Film Society, with their own cinema and bar, in the city, which began in February 2018 and saw them screen cult films and many Australian indie films, on Thursday, Friday and Saturday of each week.  Unfortunately, the venture had to stop, in November, but they will be back in 2019, in some form or another.
Of course, none of this activity can exist without the filmmakers existing.  And there are many of them currently, young and older, all working away without any funding, and all of them making work that is pretty much superior to any funded films made in this country.  It’s a veritable roll-call of names (and this list is restricted to feature filmmakers, there are many others in the shorts sphere): Mike Retter, Saidin Salkic, Matthew Victor Pastor, Ivan Malekin & Sarah Jayne, Angie Black, Allison Chhorn, Mark La Rosa, Darcy Gladwin, Georgia Temple, Robby Douglas, Bryce Reimann, Tom Swinburn.  All of these filmmakers, by the way, are not part of the legion of filmmakers who feed into the genre festivals like Monster Fest or MUFF – they all make art/experimental cinema.  If we include genre/horror, you can add another dozen names.
(There are also signs that the Australian indie filmmakers on the “next tier” – i.e. those who are getting funded and promoted by the established film festivals – are themselves making strong work, further indicating that there is a shift currently in the Australian film scene, to a more vibrant and exciting time:  Amiel Courtin-Wilson, Soda Jerk, Alena Lodkina, Ted Wilson, Thomas M. Wright.)
And the whole scene is also being boosted by various film critics and journos supporting these type of films:  Adrian Martin, through his website Film Critic: Adrian Martin ;  Jake Wilson, through The Age newspaper;  Malcolm Sutton, at the ABC Website;  Anthony Frajman, a young critic with good taste, through Filmink;  and last but not least, Geoffrey Gardner, through the Film Alert 101 blog.
It’s an interesting moment in the Australian film scene currently.


Editor's Note: Contributions to this annual series are open to all and are welcome at any time for the next month or so. Previous entries for 2018 include thoughts by Adrian Martin, Rod Bishop,  Peter Hourigan and Adam Bowen. Click on the names to find them.

CHINA SYNDROMES. There’s something happening in Chinese movies that we don’t know about. China is opening 20,000 new cinemas a year, no... 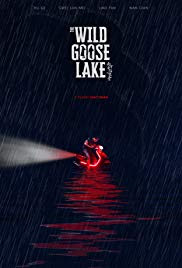