When you rolled up to the Randwick Ritz on Friday night, you found every display window at the front of the theatre advertising (left) 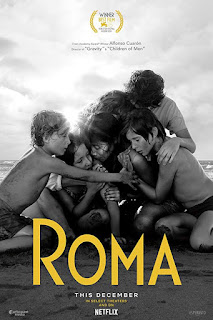 Alfonso Cuaron’s Roma. The lettering out the front, which usually lists every film showing, was devoted solely to welcoming Roma and announcing it as the Oscar front-runner.

The film will be screening at the theatre for less than a week before it  goes out on Netflix. I don’t know how many cinemas are screening it but both the Ritz and the Cremorne Orpheum devoted Facebook posts to their presentation.

When it was first announced for the Ritz, the website announced four sessions on the Opening Friday. Then ‘by public demand’ two more sessions were added for each day of the season. It may have been that the public demand had indeed been sated by those four sessions because the 6.30 pm session, one of the additionals, had a desultory twenty or so punters, not the usual number for the most popular session of the day.

Still maybe they were flocking in. The cinema had reserved its giant 700 seater Cinema One for the 5.00 pm and 7.45 sessions.

But I wonder how it was that people were actually supposed to know the film was on. Sure it went to Venice and won the Golden Lion.  But tell me if you read anything about that or saw it on the TV news. Sure it had opened the Cine-Latino Film Festival, one of those interminable and expensive Palace creations. There had been, so I am informed a media preview, at least in Melbourne, prior to the festival opening.

I am going to be very curious as to how this promotional strategy worked and I guess we’ll know the answer when Don Groves posts the box office figures on Monday morning.

But without a media strategy involving critics’ screenings or major festival previews I am curious to know how this fine film was intended to reach a public. Smothering the front of the theatre with posters doesn't seem much of an alternative. As well, six days of screenings hardly seem enough to generate word of mouth. If they do it’s all over before the shouting anyway and a remarkable picture is then reduced to whomever wants to pay the Netflix tariff and choose it from the thousands on offer through the service. Or they can choose to download it through backchannels when the pirates inevitably post it.

The days of a single print trailing round the art houses and generating its own audience are of course long gone but if ever there was a film that would warrant slow capture its Roma. The discussion it generates is very strong.

For a start the film is enigmatic. None of us even knew what the title meant and the film doesn't explain it. its likely only the Mexican audience would know as a matter of course. Reviewers with press kits, like Manohla Dargis in the New York Times who advised early in her review (read later) “Roma shares its name with a neighborhood in Mexico City where families live behind locked gates, and where maids, cooks and drivers busily keep homes running."

Cuaron’s film has some interesting effects. He is one of those total cinephilic directors and he knows exactly the effects he’s creating. Thus, after a lifetime of film viewing we know that the dog constantly trying to escape the house is going to be trouble. Similarly when the undisciplined children run through the busy traffic leaving the maid behind as they head for a movie theatre to see Marooned (this is back in 1970) we know that there will be consequences.  At least that's what we expect.

We live in a low level state of dread throughout.  It culminates in the astonishing single shot/sequence when the mother leaves the maid and three children at a beach with a rough sea and tells them only to wade. (Spoiler alert next.) The increasing alarm as the maid takes the youngest and leaves him somewhere safe and then, after telling us she cant swim earlier, wades into the sea to rescue the two other children is breathtaking. I’m not sure how long the shot/sequence goes. It feels like several minutes.

The slow recording of quotidian moments, the hopefully absolute acuity of the view of life in Mexico City and Mexico in that time, the insights into the politics of the street are all rendered in a way that simply engrosses.

Roma  is some kind of great movie and the thousand moments that it assembles together are quite extraordinary. It took awhile to get to the best movie of the year but this is it. It’s just a pity that the way distribution and exhibition works these days only a modest number of people are going to get to see it on a big screen in an absolutely silent theatre.
Posted by Film Alert 101 at 17:06