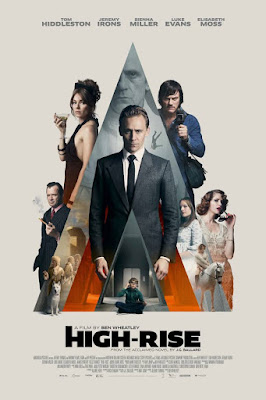 Cryptic to point of irrelevance, director/provocateur Ben Wheatley’s fifth feature is a showcase for the jarring visuals and visceral emotions for which he’s become known via 2011’s KILL LIST and 2013’s A FIELD IN ENGLAND. Unfortunately, the screenplay, written in collaboration with his wife Amy Jump from the celebrated 1975 J.G. Ballard novel, eschews narrative momentum in favour of those images. Vivid as they may be—and many are striking—what’s left is a picture that sets a pungent scene, then stumbles on delivering a compelling story.

Set in a dystopian retro-future, the film revolves around the physician Laing (Tom Hiddleston), who takes up residence on the 25th floor of a Brutalist 50-story tower block, one of many that dot the otherwise barren landscape some distance from London.

An intense and seemingly committed fellow, Laing before long becomes enmeshed in the class system of the building. Simply put, the have-nots occupy the lower floors, whilst the haves, including celebrated architect Anthony Royal (Jeremy Irons) frolic in and around the lushly-appointed upper flats and even dress as French royalty for one of the many Bacchanalian parties that backdrop what little narrative thrust exists. Under the thrall of hot-headed upstairs neighbour Wilder (Luke Evans, channelling 1970s Oliver Reed) and sultry single mom Charlotte (Sienna Miller). Things inevitably disintegrate with a predictability punctuated by more parties and some caste scheming, until the inevitable collapse of order overtakes everyone.

At least one critic has noted that producer Jeremy Thomas first offered this project to Nicolas Roeg back in the 1970s; if true it would make a lot of sense, as Roeg once explored this kind of indolence with authoritative ease. In fact, moviegoers with a longer memory may find themselves summoning images from Roeg’s THE MAN WHO FELL TO EARTH, not to mention Lindsay Anderson’s class critique O LUCKY MAN! and even Kubrick’s A CLOCKWORK ORANGE as influences on Wheatley’s style and concerns.

HIGH-RISE arrives on Australian screens nearly a year after its world premiere at the Toronto Film Festival and some two months in advance of the European bow of Wheatley's newest work, the action thriller FREE FIRE, as the closing night event of the BFI London Film Festival. Any filmmaker capable of provoking comparisons to Anderson, Roeg and particularly Kubrick is clearly working on a level above the British filmmaking rank and file; let’s hope moving forward Wheatley invests as much thought and passion in his stories as he does in his pictures.