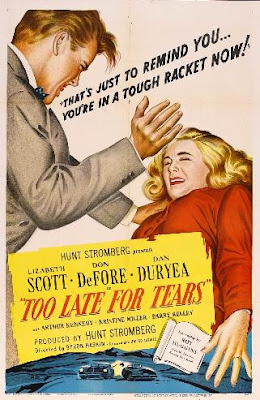 An impeccably restored blu-ray of “the best unknown American film noir of the classic era” has arrived courtesy of the UCLA Film Archives, the Film Noir Foundation and the Hollywood Foreign Press Association’s Charitable Trust (bless them all).

Long in the public domain, access to the film has been restricted to dodgy DVDs and You Tube releases, but here UCLA and its partners have restored the film from a 35mm nitrate French dupe negative and two reissue prints, one 35 mm, the other 16mm.

Too Late For Tears (aka Killer Bait) shows a post-war world of left-over gangsters from the 1930s, femme fatales imported by German ex-pats and World War 2 veterans once described by Paul Schrader as returning from the war to find “the whole society something less than worth fighting for.”
They inhabit a dark Los Angeles and live mostly at night. Jan (Lizabeth Scott) and Alan (Arthur Kennedy) are on their way to a friend’s for dinner when a bag containing $60,000 in unmarked bills is mistakenly thrown into their convertible. Jane wants to keep the money and will do anything, even murder, to have her way. Guilt-struck Alan just wants to hand it over to the cops.

An insurance blackmailer (Dan Duryea), Alan’s sister (Kristine Miller) and someone claiming to have flown missions out of England with Alan during the war (Don DeFore) all become intrinsically linked into maneuvers over the bag of cash.

The fear of becoming sucked into the prison of suburban life, another trope of noir’s classic period, is heavily underscored here: “We were white collar poor. Middle class poor. The kind of people who can’t keep up with the Joneses and die a little every day because they can’t.”

The mesmerizing performance comes from Lizabeth Scott. Hungry to transcend her middle class poverty, she’s submissive when it suits her bigger game, she’s charming to win confidences and she’s ruthless when cornered. Scott carries the film, her face flickering with emotive reactions, hard to read for the other characters but not for the audience who have little doubt about her true nature.

Screenplay by Roy Huggins from his novel; a writer who made his name in subsequent years in television as the creator of Cheyenne, Maverick, The Fugitive and The Rockford Files; cinematography from William Mellor (The Naked Spur, Giant) and directed by Byron Haskin (The War of the Worlds, 1953).

It’s not a noir masterpiece like Out of the Past (1947), but it comes close and it comes straight from the same disillusioned post-war America. Of particular fascination is the horror that drives the central character and her compelling revulsion at the rapidly approaching middle class conformity of the 1950s.
Posted by Film Alert 101 at 22:53