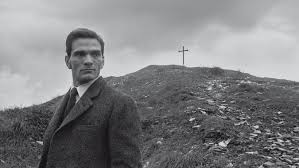 Pasolini: A Centenary Retrospective
We're celebrating the centenary of Italian director Pier Paolo Pasolini's birth
by screening nine masterworks from this peerless provocateur.
Introduced by some of Sydney’s biggest fans of Pasolini’s films.

Brought to you by Ritz Cinemas in association with the Istituto Italiano di Cultura Sydney,
Cinema Reborn, Cineteca Bologna and Fare Cinema

Sunday, Oct 16. 4:00 pm. Accattone (1961). Introduced by Hon. Associate Professor Jane Mills (UNSW). With a production background in journalism, television and documentary film, Jane has written and broadcast widely on cinema, screen literacy, censorship, feminism, and human rights. She is a member of the Sydney Film Festival’s Advisory Panel and a Programmer for the Antenna Documentary Festival. She is co-convening this Pasolini retrospective with Angelica Waite.

Sunday, Nov 6. 4:00 pm. The Gospel According to Matthew/Il vangelo secondo Matteo (1964). Introduced by Associate Professor Bruce Isaacs who teaches Film Studies at the University of Sydney and is interested in a range of film studies-related topics: histories of film film aesthetics and style, critical approaches to film production, film and popular culture.Bruce regularly posted articles on 'The Great Movie Scenes' and now on 'Close-up.' See all his articles at:  https://theconversation.com/profiles/bruce-isaacs-106382/articles

Sun, Nov 13. 4:00 pm.  The Hawks and the Sparrows/Uccellacci e uccellini (1966). Introduced by Dr Nicky Hannan, a sessional lecturer in Film Studies at the University of Sydney and a passionate lover of Pasolini’s work. He writes on cinematic temporality, mood, and affect, and is particularly interested in intersections between literature, philosophy, and cinema.

Sun, Nov 20. 4:00 pm.  Oedipus Rex/Edipo re (1967). Introduced by James Vaughan who is a Sydney-based filmmaker and a committee member of Cinema Reborn Film Festival. His debut feature, Friends and Strangers (2021) was the first Australian film to premiere in the  International Film Festival Rotterdam's Tiger Competition and was named by Sight & Sound as one of the 50 best films of 2021.

Sunday, Nov 27. 4:00 pm.  Medea (1969). Introduced by Angelica Waite, a committee member of Cinema Reborn Film Festival. With a BA (Hons) in Film Studies, her Honours research centred around Abbas Kiarostami’s Close-Up (1990), exploring dynamics of performativity, transformation, and generative processes of ‘truthmaking’ in documentary film. She’s a co-founder of The Film Group, a collaborative screening and publication project focussing on documentary and artists' moving image and is co-convening this Pasolini retrospective with Jane Mills.

Sun, Dec 4. 4:00 pm. Pigsty/Porcile (1969). Introduced by Janice Tong, by day the managing director for a tech media company, and by night a cinephile. Her thesis was on love, time and memory in the films of Wong Kar-wai and she has published on Wong in Focus: 25 New Takes, on Georges Bataille and Pier-Paolo Pasolini in the philosophy journal Contretemps, and on Claude Sautet in Senses of Cinema.

In addition to these screenings,
there will be a Roundtable Discussion
at the Italian Cultural Institute, Clarence Street, Sydney

We are also pleased to announce the launch of Writing on Burning Paper, a beautiful celebration of the life and work of Pasolini. published by Fireflies Press.This book brings together a collection of written and visual contributions from a host of contemporary filmmakers as well as a new translation of Pasolini's poem Poet of Ashes.

immediately following the screening of Salò.