Is Andrei Tarkovsky the most revered film-maker of our age? some thoughts

"Tarkovsky for me is the greatest [of us all], the one who invented a new language, true to the nature of film, as it captures life as a reflection, life as a dream". INGMAR BERGMAN

"His unusual sensitivity is both overwhelming and astounding. It almost reaches a pathological intensity. Probably there is no equal among film directors alive now." … "I love all of Tarkovsky's films. I love his personality and all his works. Every cut from his films is a marvelous image in itself.” AKIRA KUROSAWA

"Tarkovsky's works separate me completely from physical life, and are the most spiritual films I have seen”. ABBAS KIAROSTAMI

MICHAEL HANEKE voted for Mirror on his top 10 films in the Sight & Sound directors' poll and later said that he has seen the picture at least 25 times.

“Have you seen Mirror? I was hypnotised! I’ve seen it 20 times. It’s the closest thing I’ve got to a religion – to me he is a god". LARS VON TRIER

If you are convinced you have two chances to see MIRROR, Tarkovsky’s 1975 masterpiece. Tonight at the Randwick Ritz at 8.15 pm has an introduction by film-maker Alena Lodkina and it also screens on Sunday morning at 10.30 am.

Book now through this link to the Randwick Ritz webpage. https://www.ritzcinemas.com.au/movies/mirror-1975-2k-restoration

Or maybe you prefer American noir drama. In which case it could be Orson Welles whose THE LADY FROM SHANGHAI  which has its second screening tonight at 6.00 pm.

Welles has dominated the Best Film of All Time lists with Citizen Kane, since that film was first voted top back in 1962.

Here’s a small taste of David Hare’s program notes from the cinemareborn.org.au website.

William Castle, a pal of Welles,  a young hotshot, was doing the rounds of the writing desks at various studios, most lately Harry Cohn’s Columbia Pictures where he had sniffed out Sherwood King’s original novel and won over Cohn who agreed to take on Welles as star and director.

As Welles’ best biographer, Simon Callow says, he was a perpetual flirt – men, women - and he could charm the pants off a rhino, including one as tough as Harry Cohn. So he did just that securing a two million dollar budget for The Lady from Shanghai,  as a vehicle for Columbia’s biggest star, Rita Hayworth whom in another unbelievable stroke of fate, Welles had married two years earlier but from whom he was now in the process of a protracted but  amicable separation and divorce.

With no acrimony between them to muddy the waters, a Hayworth picture with a budget like this was something Welles couldn’t pass.

…and now the superb restoration, first premiered a couple of years ago at Bologna’s Il Cinema Ritrovato, is here as part of CINEMA REBORN 2022. For links bookings  for today’s final screening at 6.00 pm click on this link https://www.ritzcinemas.com.au/movies/the-lady-from-shanghai-1947

(PLEASE NOTE THAT THE PROPOSED INTRODUCTION TO THE LADY FROM SHANGHAI  BY DAVID STRATTON WILL NOT BE TAKING PLACE. DAVID IS UNDERGOING A BOUT OF SERIOUS ILL-HEALTH AND IS UNABLE TO GET TO THE THEATRE TODAY.)

There are also daytime screenings today of TROUBLE IN PARADISE (Ernst Lubitsch, USA, 1932, 11.00 am),  a major retrieval from Iran that is still banned in that country THE DEER (Masoud Kimiai, 1974 at 1.00 pm. Also screens tomorrow at 10.00 am) and the first screening of Tanaka Kinuyo’s superb Ozu-scripted drama THE MOON HAS RISEN (Japan, 1955) at 3.40 pm. 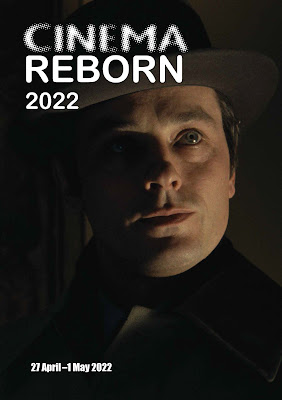 Much to enjoy. And if you want to read all the program notes in a single document you can read or download the 76 page Cinema Reborn catalogue (cover above) at your leisure Just click on this link https://www.ritzcinemas.com.au/content/Cinema%20Reborn%202022%20Program.pdf

If you wish to purchase a copy enquire at the Cinema Reborn information desk in the Ritz foyer or send an email to info@cinemareborn.org.au to find out about postal details.