The Current Cinema - John Snadden notes the end of the franchise with IP MAN 4: THE FINALE (Wilson Yip, China, 2019 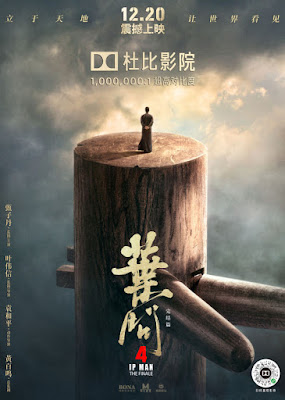 IP MAN 4: THE FINALE (2019) wasn't the rousing send-off for the series I was expecting. But the screening itself was problematic to say the least, beginning with the fact the cinema ran, unannounced, an English language dub without any subtitles.

About 30 mins into the film, the screen froze, the lights went on and a gaggle of non-Asian Hoyts employees tried to explain to a largely Chinese audience why this dubbed version was being run - and not very successfully. Eventually, the young manager offered everyone in the cinema a complimentary ticket if they chose to leave at that point - or even if they stayed. The screen then unfroze, the lights went off and the film continued... 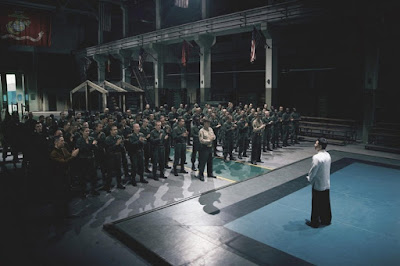 I've watched and heard a lot of badly dubbed films in my time and, unfortunately, this would register as one of the worst. Poor old Donnie Yen is given the voice of an uninterested public servant and as his HK friend Kent Cheng sounds like Ray Winstone with a bad cold. The film's grossly over caricatured baddie played by Scott Adkins has the screeching aural appeal of a B-grade Sword 'n Sandal actor.

The rest of the cast isn't much better...overall this dubbing reminded me of the early Roadshow / Warner Bros videos of Hong Kong films back in the late 1980s, early 90s.

As a film, IP MAN 4 is simplistic on many levels and seems carefully aimed at the mainland Chinese market. With its unsubtle content it is very racist at times and there's not one American character who is shown to have any moral substance. Most are depicted as gutless gang members or military ogres. 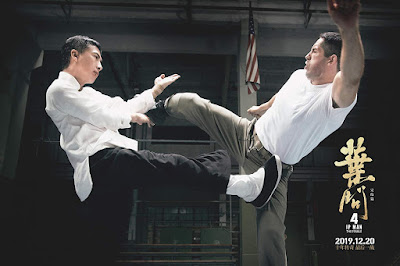 Even in this sea of cinema swill, star Donnie Yen (above left) manages to remain above the movie's obvious excesses, but his real fight for life is given short shrift. The martial arts choreography by Yuen Wo Ping is, as you would expect, pretty good, albeit not outstanding.

As the final entry in the IP MAN franchise it was disappointing but considering the money it has already made in China maybe IP MAN RETURNS is a definite possibility.
Posted by Film Alert 101 at 16:33