According to a post on the the Film Buff's Forecast Facebook Page some 15 hours ago, the program is coming to an end. The management of 3RRR have made certain decisions and as a result host Paul Harris has decided to call it quits. Here's what's been posted,

It's Official ! Death In Brunswick !!
Film Buffs Forecast finishes up on March 25 after 36 years.The content and program manger, with the unanimous approval of the program advisory group of 3RRR , have decided thus. I was called into a meeting last Thursday where I was in informed that the station was taking away my 12-2pm slot which had been a constant in my life for so long. I was offered a 1-2pm slot on Sunday afternoons which I cannot do due to family and work reasons and would never agree to anyway on principle. I was not given any forewarning of this at all and immediately informed the program manager that this was not acceptable and I would play no part in the truncation or bowdlerisation of one of the station's longest running flagship shows which has generated so much goodwill and gained respect across the listening community in general and the film culture community specifically. I did not want it to come to this but no olive branches were being handed out to me . This, of course, happened once before in 1988. But this is so difficult to write. I told the station manager earlier this afternoon , when I rang him, that the station has been part of my life for nearly 40 years and I would have taken a bullet gladly for a station whose values I so greatly respected . Now I have been effectively given the bullet. But I must admit I do feel shabbily and disrespectfully treated with no attempt by anyone at the station to discuss with me such a momentous decision . More to come, I guess .I'm off the grid over the weekend to relax ,hopefully.


Hi Paul,
As per our meeting on Thu 2nd March and our phone call on Fri 3rd March, we are opening up Triple R's Saturday afternoon programming to focus entirely on music.
Therefore, we would like to offer you the new time slot of Sunday, 1-2pm, starting in April. This will bring your program in line with the rest of our specialist talks programming on Sunday's.
I truly value the immense contribution you've made to Triple R over so many years and hope you will continue to present Film Buff's Forecast in this new time slot, rather than finishing up the show.
I really appreciate you taking the time to consider it over the long weekend and will check back in with you on Tuesday to see what you have decided.
Thanks,
Bec

Following that a further post from Paul has appeared. Here it is.

Do I Have A Leg To Stand On Dept. ???
After not hearing boo from the station ,apart from Bec, which seemed not to indicate this was a particularly significant programming move I rang the the 3RRR manager Dave Houchin this afternoon who promised me that he would pass on the below missive to the members of the advisory committee in a spirit of ecumenism . I don't really expect anything to come out of this but it's one last attempt to state my case and is really my duty statement about the programme's modus operandi and social importance so that they cannot claim ignorance when the official ' spin' comes out

Dear Bec and members of the RRR program Advisory Group

I have given considerable thought to the unanimous committee decision that Filmbuffs Forecast show be moved to a one hour time slot on Sunday and write to formally decline this 'offer ' for the following reasons:

The two hour format has shaped the show over the course of over three decades to meet he station's charter:, as stated on the official website, " to educate, inform and entertain by drawing upon appropriate community resources, and to develop a critical approach to contemporary culture. " Our program has provided a substantial platform for informed and considered discussion about film culture on both a national and international platform with our independent coverage and a style which encourages frank discussion in an informal manner that's resonated with listeners . The reduction of the show to a one hour time slot prevents the essence of of its purpose being realised for no good reason and asks that I acquiesce to the bowdlerisation of the ' brand' .
The show provides an intrinsic and unique focus on film soundtrack music as a part of film culture. We play, on average, at least a dozen soundtrack recordings to break up spoken word content but also to create awareness amidst our listenership of outstanding work in this field, going back to the advent of the sound era. This policy is not replicated anywhere else in Australia as far as I know and has been the subject of vigorous support from casual listeners and musicians who work in the field. Of course, most of the other programmes on a Saturday have a similar format combining music and spoken word, many with regular interview, talkback segments,book reviews and the like – the rationale to transform the present mix into ' musical Saturday ' seems unclear and the gutting of Film Buffs in such an insensitive manner reflects no credit on those who 'advise '.
The show continues to have a strong following and goodwill, confirmed by the feedback received through the Facebook page and the response to the annual Radiothon and is highly respected throughout the film cultural community, through private industry and Government bodies .
Over my time at 3RRR I have assiduously worked to support the station as best I could,promoting the various events presented by the station and at Raditothon time I became quite manic in my efforts to put ' pitches ' across that would result in subscription calls. These ' pitches ' were personalised and reflected my personal; views about a station which I have cherished over a major part of my life. I now feel like I have conned well-meaning listeners.
The feedback I have received from the station has been almost non-existent and not raised with me before now. I have been denied the opportunity to address the concerns the program advisory group may have with the show,if any. This seems to me to be a dishonest and disingenuous way of approaching the management of the station, one that declares itself to be about community. There is no demonstration of procedural fairness in the way this matter has been dealt - a total lack of consultation, and no constructive reason for the decision.
The strong following for the show includes members of the public and of the film community, demonstrated by the recent 2,000 + positive likes on Facebook to an article on the shows origins. These members of the community will be affected by the decision of the station to stop filmbuffs forecast for being broadcast. Our Film Buffs Facebook site, which provides daily updates, currently has over 4000 subscribers.
Proposal

I propose that the station do the following:

Reconsider the decision for the ultimatum to move filmbuffs to a one hour timeslot on Sunday and keep it at its current time-slot of Saturday for a two hour show
That the station provides a cogent reason for the decision in writing
That we meet and discuss this decision and reason further in order to come up with a mutually agreed upon decision about the show that will address the concerns you may have
My commitment to the show, including the number of hours spent on its preparation and content, remains as does my commitment to RRR as a community radio station that cares about its community.

I look forward to hearing from you within the next week on the above proposal.

Paul Harris
(seen below attempting to win over the star chamber with oratory but hey, real life's not so simple as a Frank Capra movie) 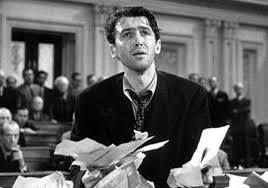