Editor’s Note: Rod Bishop is a regular contributor to the Film Alert blog. His most recent posts  have included a contemplation of  the Age of Donald Trump and on the making of a film with the Mataungan people of Papua New Guinea. He was the producer and co-writer of the recently restored and re-released (on Blu-ray) Body Melt  and has also been a prominent critic, writer and educator. He was the Director of the Australian Film Television and Radio School from 1996 to 2003.

Rod was recently invited back to La Trobe University in Victoria to make a speech celebrating the University’s 50th anniversary since its establishment in 1967.  This is Part 1 (1967-1969) of an expanded version of the talk .

1967. They say the first student intake at La Trobe University was 500 students, but it felt more like 200. There were only two buildings - Glenn College and the Library. To get to the carpark, the new students had to walk from Glenn College and past the Library. One of my most cherished memories from that first year was seeing the esteemed Professor of Economics Donald Whitehead, standing outside the Library berating students on their way to the carpark for not coming inside to study.

We had a very good time in that first year. So good, it’s said two-thirds of us failed in at least one subject.

On that first day at La Trobe I saw a notice posted on the wall of Glenn College reading something like “Anyone who wants to help start a film society meet here at 5”. The motley group who turned up included Peter Beilby with whom I am still good friends and his mate Philippe Mora. A smallish but enormously energic Bob Dylan lookalike, Philippe said “let’s all go back to my place for the meeting”. Philippe turned out to live in an Art Gallery and took his family meals in a restaurant - the Tolarno Art Gallery and Restaurant in Fitzroy Street, St Kilda. His mother is the extroverted painter Mirka Mora and his father was the suave Georges Mora, a man who’d fought for the French Resistance alongside the mime Marcel Marceau. Philippe’s parents served us French coffee, each cup with an individual filter, and talked to us like we were their equals. This wasn’t constricted, constrained and constipated Mont Albert anymore. I’d gone to a parallel universe and didn’t intend returning anytime soon.

In that first year, under Philippe’s influence, the film society became a force on campus. We even held a “Cinematheque Discotheque”, with 16mm projectors screening Metropolis and Battleship Potemkin onto screens above Jeff St John and The Id and Max Merritt and The Meteors. We had no forward planning and no idea how successful the event would be. The entrance money kept piling up on a table. Periodically one of us would take an armful of the stuff to a room in Glenn College, throw it on to the floor and lock the door.

The film society published the first edition of Cinema Papers that year, edited by Philippe and Peter. It never would have happened without the help of Kay Mathews, a secretary in the Philosophy Department. Late at night, Kay let us in to the department to roneo-off the magazine using the department’s equipment and paper. Cinema Papers went on to become Australia’s leading film magazine for the next 30 years.

Around Glenn College, the Charismatic Ones were seen with import copies of Are You Experienced?

Glenn College was a strange beast that first year. We were all expected to wear academic gowns in the cafeteria at night. It was part of something called The College Concept - borrowed from Oxbridge - where students would belong to one of ten colleges around the campus. There would be no central Student Union for students to congregate. As the legendary 1968 dawned, the College Concept seemed like a wrong idea at a very wrong time.

1968 and the fun of the first year was over. It was now all about the War. Political clubs proliferated and you could almost see the political counter-culture form in front of your eyes. The Military Industrial Complex? Boo! Down with American Imperialism – hooray! When students walked out of lecture theatres where their ideas (and ideals) were constantly challenged by some very good teachers, they walked into a whirlpool of student activism. La Trobe become very radical, very quickly and stayed that way for the next five years.

The Charismatic Ones were seen on campus with import copies of Music from Big Pink.

In September of 1968 Donald Chipp drew my birthday marble from a barrel and I was conscripted into National Service. Although automatically deferred until I finished my degree, I sent a letter to the Department of Labour and National Service informing them I had joined their growing list of Draft Resisters.

1969 and it was all about the War. But now the North were winning. As fellow student Martin Munz declares in Beginnings, a film I was to help make in 1970: “Those people who are our powerful friends have lost…seems to me they’re finished…America’s going down…a country that can’t control internal dissension can’t maintain a strong foreign policy and that’s the only thing we care about….”

That year, I co-edited Rabelais with Keith Robertson, another of the 1967 intake and still a good friend. We upped the political debate of the student newspaper and spent one entire edition demolishing The College Concept. In the end, only three of the ten colleges were built and La Trobe joined the rest of Australia’s universities in having a Student Union building. Fellow student Scott Murray, destined to be a later editor of Cinema Papers, contributed film reviews to Rabelais. Don Watson and David Loh edited the magazine in the second half of 1969.

The Charismatic Ones lost much of their charisma when no-one took much notice of their import copies of The Flock.

As the academic year wound down I joined the editorial board of Cinema Papers with Peter Beilby and Demos Krouskos to produce 11 fortnightly editions, entirely financed by advertising revenue and designed by Keith Robertson.

Next Part – 1970: Beginnings and my fate as a Draft Resister. 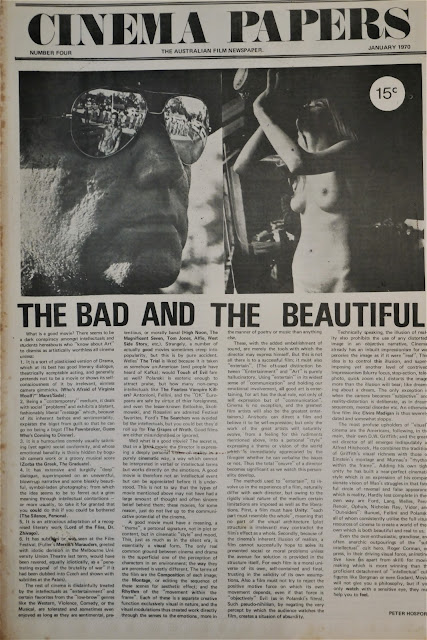 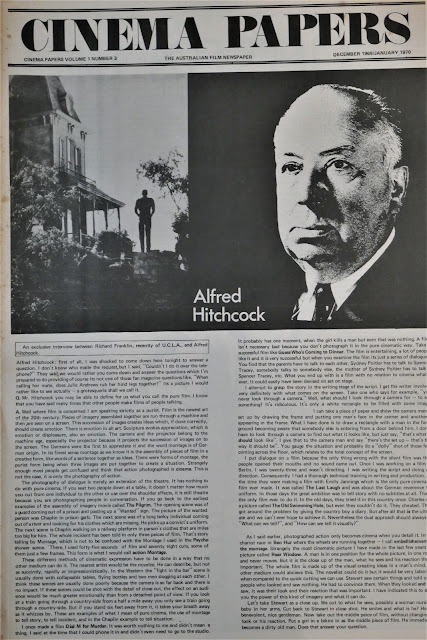 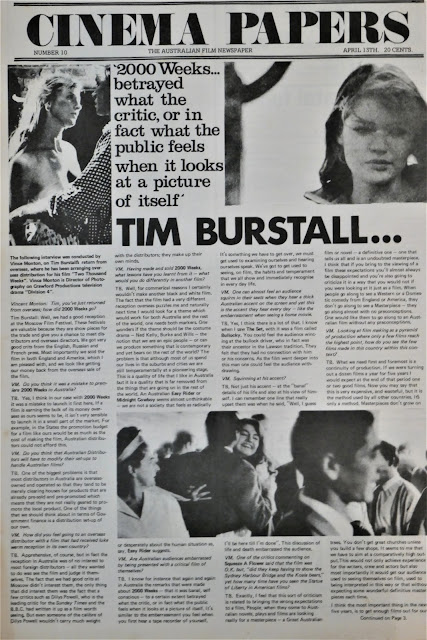