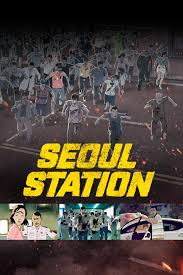 I had heard about this as the parallel animated production to the director’s celebratedlive action debut, zombie movie Busanhaeng/Train to Busan which broke South Korean attendance records. and we can spot the pile up of running monsters in both. Busanhaeng got isolated runs here and had a free to air TV showing a few weeks back. I enjoyed it but on balance I like the toon better despite it’s quite crude style of drawing. The story is that they weren’t game to run it till Busanhaeng’s success.

Director Sang-ho Yeon’s had notched up a few feature cartoon hits previously. Echoing the grim live action of Oldeuboi/Old Boy or Chugyeogja/The Chaser which preceded them, his Studio Dadashow’s 2011  Dwae-ji-ui wang/The King of Pigs and 2013 Saibi/The Fake, had more connection with those  bleak depictions of Korean life than they did with Pixar or Dreamworks.

Seoulyeok is pretty severe even by the standards of Asian horror which it draws on. The set up-plays at Seoul Central Rail Station which is closing down for the night. A homeless man stained with black blood proves intimidating for the young would-be helpers but one of the station hangers-on tries to get the staff to take an interest. All they find is a black pool of blood where the man’s dying body had been.

Parallel with this, a teen age girl voiced by Eun-kyung Shim, who has a spot as a girl runaway in Busanhaeng, looks like being thrown out of her rat hole flat for non payment. (“The bar job only made my debts grow”) She has found that her pimp boy friend is offering her in a Net advt. placed at the local cyber cafe. Her poverty and family problems are forgotten when she finds herself banded up with the derelicts who sleep at the station, pursued by ravenous zombies and rushing to take shelter in its police station cell with an infected officer whose side arm is rapidly reduced to two unused rounds, as the undead claw at them through the bars.

This is just the start of a night which includes being trapped under a door grill, attempted escape through the Metro tunnels, the boy friend and her father, who has been alerted by the net posting, unable to locate her after their own escapes, taking refuge with survivors in front of the police station only to find the authorities are as hostile as the monsters and final cynical twists that contrast their plight with the lush model apartments they attempt to shelter in.

The film has the unexpected element of playing out the action among the disadvantaged - unemployed youth, the homeless, an Anti-Communist unable to understand why a lifetime of work is not being respected by the authorities’ massed forces. One scene has the concerned police commander calling his men off the agro father who has attacked him, regognising the man’s situation.

...and of course lots of ravaged ghouls going for the throats of stray pedestrians, definitely the stuff of nightmares. It gave me one. The last time that happened was from watching Why We Fight  - Divide & Conquer half century back. It’s not to hard to see the film as embodying the paranoia of the moment.

Seoulyeok is conspicuous by any standard. Whether it is too vivid for main stream distribution is speculative. After the triumph of Parasite you would have expected some enterprising distributor to peddle a Sang-ho Yeon retrospective but of course that didn’t happen. What we got was extra sessions of Parasite.