Orson Welles promises: ‘… everything you’ll hear from us is really true and based on solid facts.’ One of the stories Welles “tells” within F For Fake is of notorious art forger Elmyr de Hory and his biographer, Clifford Irving, who also concocted an “authorised” biography of Howard Hughes. Sharp-eyed film buffs will know that the Elmyr de Hory & Clifford Irving footage was actually directed by Francois Reichenbach for the BBC2’sThe Money Programme, and edited with great skill by Arthur Solomon. (I was Arthur’s assistant film editor at the time.)

Excellent noir, directed by John Huston. Detective Humphrey Bogart tussles with a fascinating collection of villains (Mary Astor, Sidney Greenstreet, Peter Lorre), who are backstabbing each other over a priceless sculpture. Wordy, but rich in sub-text and character complexity. 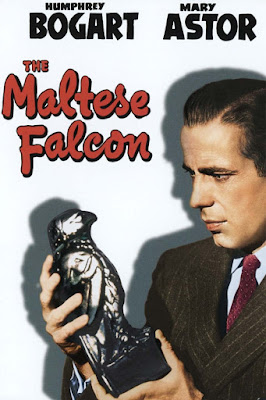 Based on a best-selling, epic novel by Margaret Mitchell, set during the American Civil War. Vivien Leigh is Scarlett O’Hara, a scheming Southern Belle; Clark Gable is Rhett Butler, a charming, scoundrel. Their passionate love for each other is severely tested by the Civil War...and that’s just a part of this extremely impressive movie.

Medwin has died, aged 96.  He began his career on the stage, and went on to become a popular British character actor in scores of films of the post WW2 period. Later, Medwin co-founded, with Albert Finney, Memorial Films, and co-produced (with Lindsay Anderson) the ground-breaking British films If (1968) and O, Lucky Man (1973). His career spanned seven decades.