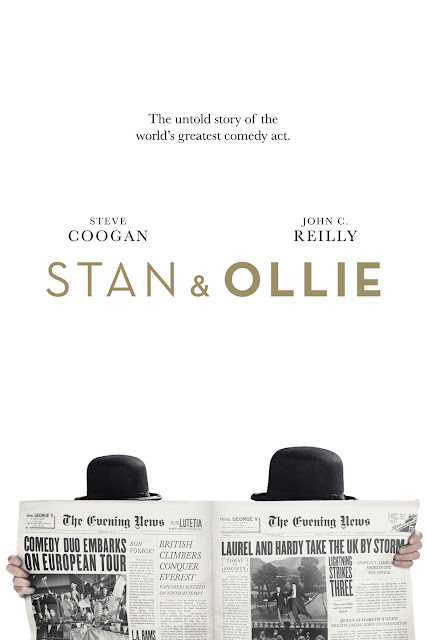 Eight things I know about Stan & Ollie. (There may be more added).

You should see it for yourself.

2.     As the two stars leave their dressing room and head for the studio where they are about to film in the dance sequence, Stan says to Ollie something along the lines of “I’m not going to get married again. I’ll just find a woman I don’t like and give her a house.” The same joke is in the Jacobson Brothers Kenny. It must be an oldie but goodie even though I've only ever heard it twice.

3.     The writer of the film, the director and the actor playing the impresario Bernard Delfont have surely trashed Delfont’s reputation possibly for ever. Delfont was born in Russia and was the brother of Lew and Leslie Grade,all three immense figures in the Brit movie industry. Wikipedia says that Delfont entered theatrical management in 1941, age 32, after a career as first a dancer, then an agent. He presented over 200 shows in London and New York including more than 50 musicals. He also presented summer variety shows in many towns across the country, mainly seaside resorts. In Blackpool, he owned all three of its piers (South Pier, Central Pier and North Pier). Delfont withdrew funding for Life of Brian in 1978 at the last moment, due to worries over the religious implications of the screenplay.

4.     Hal Roach’s reputation as a cheapskate, chiseller and very hard bargainer is thoroughly endorsed by this movie

5.     The closing credits are presented in such a way that you don’t read the names. In a box at the side is the dance sequence from Way Out West  (link above) intermingled with photos of the real Stan and Ollie. You cant tear your eyes away.

6.     One of my Christmas presents was the novel “he” by John Connolly. It’s about Stan. Peter Hourigan reviewed it for the Film Alert blog and you can read his thoughts if you click here. Starting it tomorrow.

7.     Shirley Henderson’s brilliant turn as Hardy’s wife is best summed up in a fabulously timed routine she does next to Laurel’s wife as she beats her to every line. The Steve Coogan John C Reilly timing is brilliant. Henderson’s is even better. “Two double acts for the price of one” says the embarrassed Bernard Delfont (Rufus Jones).

8.The running gag about the popularity of Norman Wisdom is one for the cognoscenti of a certain age. Maybe there is a huge overlap between the audience attending Stan & Ollie and those who remember even vaguely Norman Wisdom. One memory of Wisdom that lingers is how he was popular in a number of countries that otherwise didn't take much to Brit comedy. Chief of these was Albania where Wikipedia notes his films were the only movies with 'western' actors permitted by the dictator Enver Hoxha. Wikipedia also has a claim that Wisdom was Chaplin's favourite clown. Considering that Wisdom didn't get started till the fifties its hard to know the basis. Some checking indicates the source for that as a 2000 news report on the BBC when Wisdom got a knighthood.
Posted by Film Alert 101 at 12:29