The Childhood of a Leader is the premier directorial effort of the actor Brady Corbet. 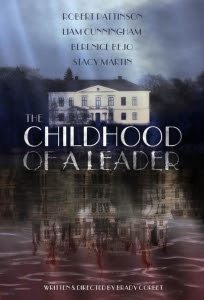 The film is set in Paris France in the period after the German surrender in the First World War, November 1918 and up to just after the German surrender in the Peace Treaty of Versailles, 1919. It is overwhelmingly set in a large "farmhouse" as described in the film itself, but, although quite rundown, it is much more than that – it is a substantial villa. Not in particularly good condition but bearing the faded grandeur of the preceding Victorian period (very opulent curtains for example) and even earlier I would think stencilled walls, it seems a strange choice for "the Father", "the Mother" and Prescott, the young son. The father is an advisor to Secretary of State Lansing and they are all in Paris with President Wilson during the negotiations preceding the Treaty. Liam Cunningham, an Irish actor, maintains a very passable, it seems to me, American accent and bears a sufficient superficial resemblance to Woodrow Wilson, that I thought it was going to be about this president's early life. My mistake.
Constructed quite deliberately, through the use of surtitles, as being Tantrum 1, Tantrum 2 and Tantrum 3, it conveys the back story of Prescott as being highly if not grossly egocentric. The film charts this growing narcissism and is apparently (at least to me) an attempt to provide a model for the life circumstances of the Fascist dictators, say 20 years hence. The film is quite chilling, principally because from a viewer's perspective, there is nothing that can be done. It plays out with all the inextricability of a Greek tragedy.
Tom Sweet who plays Prescott, gives a mesmerising and intense performance. For such a young person it is extremely mature. All the other actors are at the very least competent. Unfortunately their material is quite limited. Much of the review material I have read has focused on arguments of nature and nurture to explain Prescott's behaviour. In the 19th century it was by no means uncommon for very young male children, to be dressed like girls until quite late, say 7 or 8. I'm pretty sure this behaviour disappeared by the 20th century, but Prescott wears remarkably feminine type clothing, has his hair long and indeed is frequently mistaken for a girl. This is emblematic of the film which does not quite capture the physical truths of the period in the same way as a, for example BBC period drama does.
Presumably this can be placed at least to some extent on budgetary limitations.
Although quite possibly the progenitor of Prescott's behaviour, in terms of leadership, would be Adolf Hitler, this film has no emotional attachment with anyone. That's why it is so hard to like. Many of the better reviews I have read focus on the apparent failure of the parents' marriage and in particular the general absence of the Father, to explain the increasingly erratic behaviour of Prescott. Since I have a younger relative, who bore, when young, a striking similarity to Prescott, and who behaved in exactly the same egocentric way, I would put the problem down to Aspberger's syndrome or something else on the autistic scale.
At the end of the film, underneath a very large glass dome in a building which seems to me to resemble the Berlin Reichstag, a group of bureaucrats conclude their work and then go downstairs to meet their "leader". It is in an unnamed dictatorship and rows of guards in uniforms that would be thought to be, at least Communist in flavour, hold back cheering crowds for the arrival of the leader. The time is indeterminate. It might be just on World War II, but by the look of the cars, it seems later – the immediate postwar period. In any event, reverting to the earlier and major part of the film, the Mother has a close relationship with Charles (Robert Pattinson), perhaps sexual. Alighting from his car, the leader is "Robert Pattinson". Now whether the leader is Prescott as an adult and he is the illegitimate lovechild of Charles and the Mother or whether Mr Pattinson is playing whoever, because it gets him to do a bit more work in the film, than he otherwise would, I simply don't know.
As I've said, the acting is pretty much uniformly good, although Mr Pattinson appears to be quite disengaged. Within presumably severe budgetary limitations, the settings are appropriate although some audio is very weak. The film score is consciously symphonic, but modern, and is certainly to be taken seriously although it becomes very strident in parts.

JEAN-PIERRE MELVILLE IN MELBOURNE .....AND SYDNEY

This note is being sent out to the largely Sydney-based Cinema Reborn subscription list in the hope that some among you may alert your frien...