The first of what may be an intermittent series of short notes on recently watched J. Arthur Rank movies taped off ABC-TV late night screenings long ago and finally seen. For a full list of titles dealt with so far you can go to http://www.filmalert.net/reviews/J-Arthur-Rank.htm 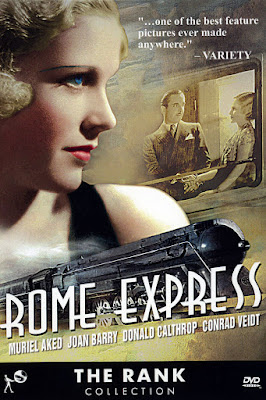 Zipping along for its 86 minutes, most of the credit for the enjoyment in this movie probably should go to scriptwriter Sidney Gilliat who juggles a dozen characters and several train carriages into a rather smart detective story. The McGuffin involves a stolen Van Dyck painting and the half dozen or so people interested in acquiring it. These include Cedric Hardwicke as a parsimonious millionaire and Conrad Veidt as some sort of crooked thug (though its too early for him to play a Nazi). Then there are two cute blondes who hover on the edge of the action, Esther Ralston playing movie star Asta Marvelle and Joan Barry as Mrs Maxted.  The scene where the latter lady is semi-sprung while on a frolic with her lover, something she seems not to be enjoying that much, when her boyfriend is recognised by his next door neighbour and a a juggle of characters end of being seated at the same table with three of the four playacting different  roles for themselves is very smart indeed. Made in 1932 there is some clunk to it all but what does surprise is how much French is spoken without subtitles by the staff at the railway station, the porters, the stewards and cooks. Unfortunately the head of the Surete, M. Jolif, who happens to be on the train (!).  He takes charge of the investigation is played by a Brit (Frank Vosper) in a fashion that Peter Sellers perfected three decades and beyond later. When the train crosses into Italy we learn it only by the Italian police getting on and one of them saying “Andiamo!”  Pleasurable indeed.
Posted by Film Alert 101 at 19:32