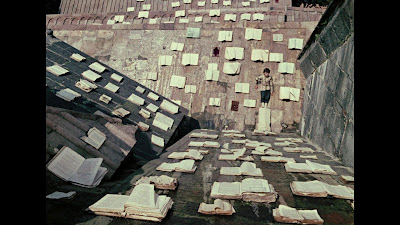 In place of review, random hallucinatory screens (click them to enlarge) from the Second Sight 2 Blu-ray disc boxset of Parajanov's mythical film, The Color of Pomegranates. 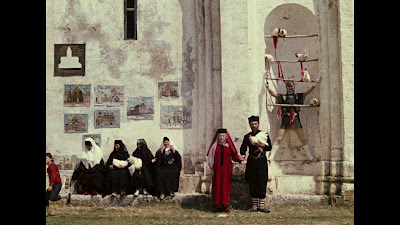 Blu-ray dIsc of the year so far, and surely hard to beat. It's like Jean Rouch took a giant acid tab and channeled Kenneth Anger into this frontally tableau style tapestry of the life of Armenian poet and musician Sayat-Nova. Which is then overtaken by the wildly lyrical personality of the genius, Parajanov himself. 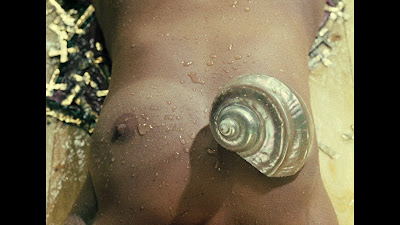 Jim Steffen has suggested Pomegranates shares a degree of mood and tone with Anger's Inauguration of the Pleasure Dome and I share that sentiment totally. 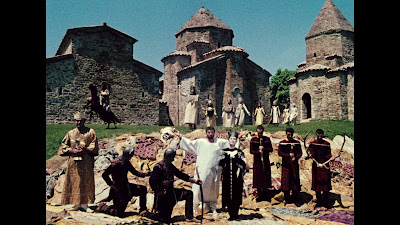 Among other things, Parajanov's temperament displays a keen gay sensibility that presents his male actors in both fetishized and transgressive ways which were able to completely slip under the radar of the censors, even in the Soviet approved Yutkevich cut. 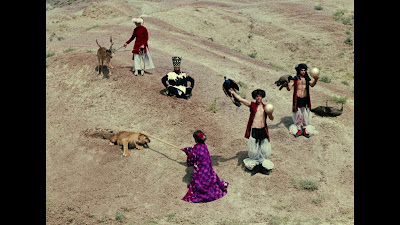 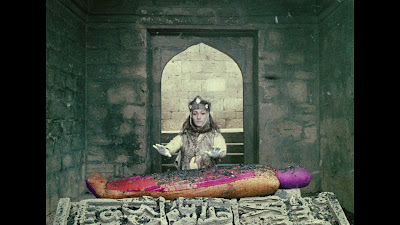 The screens are from the restored Parajanov "cut" on the Second Sight Region B UK disc. The Criterion Region A disc (not reviewed by me) includes a 48 minute video essay by my friend James Steffen, as well as a commentary from Tony Rayns but does not include the Soviet approved "alternative" cut by Sergei Yutkevich, included on the Second Sight UK set. which itself also carries a different color temprature and palette to the restored Parajanov cut.
I made the impossible decision of which of the two sets to buy by only getting the UK Second Sight 2-discer, and now I really also want the Criterion if only for Jim's essay. 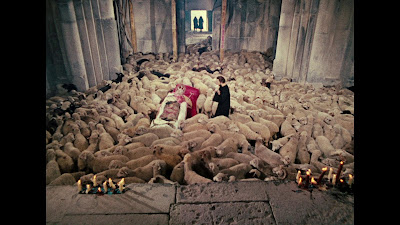 Anyway soak up these images and dive into one or the other or both purchases of this incredible, unique film.
Should I also mention Geoffrey Gardner will, be screening this breathtaking restoration during his Cinema Reborn festival in Sydney May 3 to 7.

Editor's Note: Indeed you may mention that. John McDonald is doing the intro. In the meantime your can also read Tony Rayns excellent program note on the film

Send an email to filmalert101@gmail.com to go on the Cinema Reborn email list for updates and information.
Posted by Film Alert 101 at 20:37