Mary Stephen - film-maker, editor, mother, teacher is presented with the award of Knight in the French Order of the Arts and Letters

On 16 March in Hong Kong my dear friend Mary Stephen was presented with the award of Knight in the French Order of the Arts and Letters.

The speech by the French Consul was a wonderful tribute but regrettably permission has not been give to re-publish it. However you can read a report posted on the French Consulate In Hong Kong's website if you click here 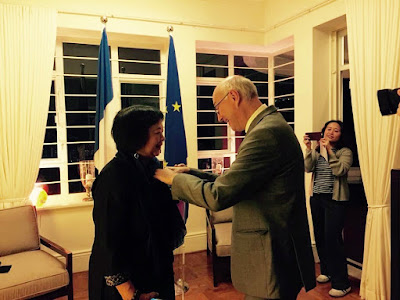 However Mary's words in response are on the record. Here they are

"Thank you very much. I am not much for words so this will hopefully be short and sweet, since I look forward to having a drink with all of you! I’m very honoured to be receiving this from the French Ministry of Culture. I wish to stress once again that this love affair with French culture, and especially French cinema, started for me in Hong Kong as a teenager: Law Kar who is present here and Lok Le who is too shy to come, are completely responsible ! It did pave the path for a lifetime looking for beauty and meaning rather than wealth and status, and definitely explains why I’m still so poor after so many years of hard labour !


The meeting with my most important mentor Eric Rohmer at 22 completed my education, and to this day I operate according to his principles of low-key simplicity, detachment from material goods and self-promotion, and particularly his belief that the work should speak for itself and that should be enough promotion (obviously that way of operation suited Eric well and was the secret to his ending up a very successful and prosperous man with all the rights to his films and more awards than he can fit on his shelves) ! Indeed my professional path was really written in France but always with the memory of the roots which are here in Hong Kong and which in recent years have become new inspirations. My three children are all born in France but as they would say themselves, they are "French of Asian origins", so the second generation is carrying the double-culture again. They and their partners are all in the artistic domaine, and perhaps, who knows, so will be my grandson as well, who already, at two and a half years old, navigates between France and China and speaks both languages with the same ease. Thank you again. Merci beaucoup."