Italian Film Festival - Barrie Pattison reviews WIFE AND HUSBAND (Simone Godana, 2017) and remembers more than a few other films which try for the same trick

Editor’s Note: Barrie Pattison's earlier reports on the Italian Film Festival can be found if you click on the following film titles After the War, I Can Quit Whenever I Want to: Masterclass, Let Yourself Go, Messy Christmas, Stories of Love that cannot Belong to this World, These Days & Sicilian Ghost Story, From Naples with Love & Ignorance is Bliss and Fotunata & The Intruder

Thorne Smith didn’t know what he was starting when he wrote “Turnaround” in 1931 - the bodies of a husband and wife are switched by a pagan deity. Hal Roach made a 1940 movie of it which was pretty much suppressed. The Legion of Decency considered it morally objectionable (in part) and it didn’t get the re-issues scored by Roach’s other feature efforts like Topper and Captain Fury.  However, viewers with a long memory gave it a word of mouth reputation as kinky.

Comes 1948 and Peter Ustinov did Vice Versa with father and son switching bodies (compare Dudley Moore in 1987s Like Father Like Son) and we get the Debbie Reynolds and Tony Curtis in Goodbye Charlie of 1964. (“All my life I’ve been a gourmet and suddenly I’m a lamb chop”). Throw in a couple of Freaky Friday’s. I would think the personality swap thing had pretty much had its day by now. 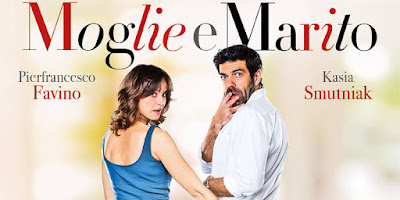 However, Simone Godano figured the idea could stand another go round as her first movie Moglie e marito/Wife & Husband. I wasn’t so sure. To start with macho Pierfrancesco Favino (Suburra) and elegant Kasia Smutniak (Perfetti Sconosciuti/Perfect Strangers) seem unlikely contenders for a gender swap but that’s the thing that drives the film. Inner Favino having to come to terms with kissing outer Favino with three days growth of beard is in the same dodgy area as Hal Roach but they embrace the possibilities and the leads enjoying making out is one of the funniest parts of the film.

He’s a scientist trying to produce a machine which will transfer memories from one individual to another and she’s a sleek wannabe TV personality. Their marriage is on the rocks when his machine swaps them over. There is the now familiar uneasy comedy of her acting butch and him fluttery but they do manage to get laughs out of inner Favino sitting with legs apart revealing his panties on her TV show and moving into startled Valerio Aprea’s flat while Kasia is outraged that he is putting junk food into her trim body and letting the baby breast feed after she had weaned it.

The piece gains a bit more traction when the pair have to use their old skill sets to sort out the problems they have caused but the ending when both have to articulate what they’ll miss if the transfer is reversed is actually quite touching.

Best glossy European production values put the characters into plausible home, laboratory and TV industry settings. Intriguing to consider what the first female director in this cycle does differently.
Posted by Film Alert 101 at 14:49 1 comment:

The Current Cinema - BATTLE OF THE SEXES plays its part in the "Yes" campaign. 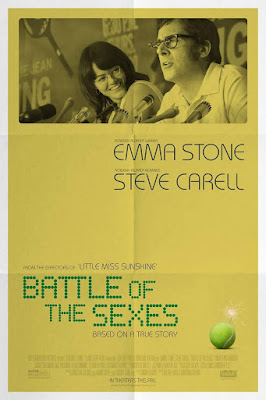 Battle of the Sexes is an absorbing re-creation of events only partly known even to sports fans who remember just the public face of the circus that it chronicles. In brief, its notionally about Bobby Riggs, the down on his luck gambling addict and formerly triple tennis Grand Slam winner, who hit on the idea of challenging the best women tennis players in the world. Riggs is perfectly rendered by the inimitable Steve Carell. Really, it’s about the pain and difficulty of coming out lesbian and the struggle of women for equality. The bastion of reaction and the stand in for the (still) male world of sports administration is tennis promoter Jack Kramer, oleaginously impersonated by the great Bill Pullman

In saying that it re-creates those events, you of course have no idea whether some license has been taken in placing the personal crisis of Billie-Jean King around the match between her and Riggs and in perfect alignment with King’s first exploration of her lesbian preferences. It sure makes for a dramatic movie though.

It was obvious that much of the crowd at the Randwick Ritz had no idea who won the match. There were gasps and cheers as points were played, won and lost in the final match. Tension abounded and the crowd responded to the rather fine editing which accelerated King’s assumption of dominance over the tiring and under-trained Riggs as the match neared its end. We remembered with some glee how Riggs put his faith in the ingestion of massive amounts of vitamins and dietary supplements in preference to practise.

The makers have nailed all this.

They have also nailed the representation of Margaret Court, the Australian multiple Grand Slam winner, almost unbeatable for some years before both King and Evonne Goolagong came along to dislodge her. In the film Court joins the nascent women’s circuit already a mother and bringing along her husband Barry as child-minder. Barry was one of the sons of Charlie Court, the Premier of Western Australia who presided over the first great WA mining boom. Another son Richard also became Premier of the state. Margaret Court became part of the WA establishment but was always a sour-faced person, utterly humourless. She took a very dim view of anything much beyond literal meanings of the Bible. She has ended up as some sort of pastor in some ratbag fundamentalist sect no doubt conveying her eternal sourpussedness to her captive Sunday crowd. One of the arenas at the Melbourne Tennis Centre is named after her.

On Court’s arrival to join the newly formed Virginia Slims women’s circuit the film-makers make clear that Margaret is one out, a mother who disapproves of all that women’s sports lesbianism that she sees rampant among the top players. She has kept her views strong throughout her life and is now among the leading figures in the current “No” campaign urging a vote against same-sex marriage. She has taken a particular dislike to Alan Joyce the gay CEO of Qantas who has both urged a “Yes” vote and put a million bucks of his own money into the campaign.  Margaret Court suggested a boycott of Qantas. If it had been a union thug suggesting a boycott of some business for political reasons the ACCC would have been up their arse very quickly but the right gets away with these things.

Just a couple more things to note. Someone in the White House, perhaps even the Grand Boojum himself, has seen this movie. One of the songs featured on the soundtrack as Billie-Jean and Marilyn drive towards LA is Elton John’s “Rocket Man”. It’s appearance at this moment suggests someone on Pennsylvania Avenue suggested hey that’s what we should call that North Korean guy with the bad haircut. Yes, put it in somewhere in that speech the Chief is giving at the UN. Ho ho, what a wheeze. Political staffers rest easy for a day or so when they come up with one of those.

And… while Tony Abbott is worrying about a song at the NRL Grand Final he should also be worried about this movie and its ability to move people. Probably should be more worried because the lesson of this movie is being absorbed by hundreds of thousands of people as we live and breathe.  At its end, after Billie-Jean and her long suffering husband have squared things away and after Ted Tinling has given a rousing little speech about being yourself, applause broke out. You could feel a palpable positive mood. Maybe when the “Yes” case is run and won, someone might just reflect on the modest influence of this little movie.

And more…by the way, Emma Stone’s impersonation of Billie-Jean King is quite something…. 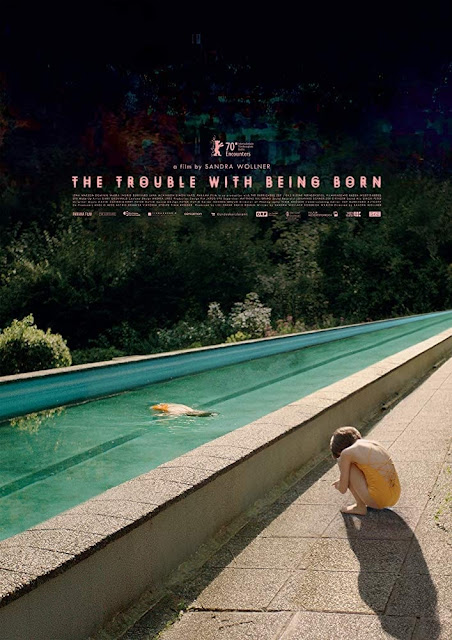