A somewhat amazing set of circumstances allow Cinema Reborn the pleasure and privilege of a screening of an archival 35mm print of Francis Ford Coppola's 1982 musical One from the Heart.

It comes to us from Francis Ford Coppola’s personal archive, by way of a rare screening in Paris at the Cinémathèque française as part of a season devoted to the work of Director of Photography Vittorio Storaro. Storaro’s photography is stunning here. So too is the music of Tom Waits - one of only a small number of film score he wrote. Waits also sings his own songs, including some remarkable duets with Crystal Gale. You can spot Waits standing on a street corner if you are..alert.
The screening will be introduced by the doyen of Australian film critics David Stratton
In the meantime you can find Eddie Cockrell's program note if you click here onto the Cinema Reborn website.
Have a trawl around the site to find the full program and notes on most of the other films that will be screened. Subscription sales giving admission to the entire sixteen film program taking place from 3-7 May at the Australian Film, Television and Radio School in the Entertainment Quarter in Moore Park, Sydney, will commence on Tuesday 20 March. Links will be put up when they open. 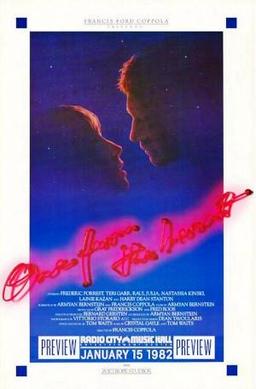