Anyone interested in pre-Rashomon Japanese film has had to rely on the odd cultural manifestation until YouTube showed up with a sizeable range - varying quality, but often as not English subtitled. In combination these endorse the notion that Japanese films made the great leap forward in 1950. Exactly why is still speculative.

You can see the abrupt improvement in the films of established directors like Kurosawa and Mizoguchi before critics pounced on them and going back a little the effect of the U.S. Occupation throwing out the decrepit old film processing plant and replacing it state of the art, just in time for Eastmancolor.

A friend asked the laboratory manager how they achieved their stunning colour and he said “We follow the instructions on the tin.”  I figure we’re still missing some of the clues there.

At least one major work has been passed over. World Events cost Hiroshi Inagaki’s 1943 Muhmatsu No Issho/Matsu the Untamed its proper recognition. The war time Japanese censors lopped twelve minutes out of the ending and post war film historians wanted to believe Japanese cinema started with the films they knew about.

It’s quite plausible that Matsu the Untamed complete was the most accomplished film then made in Japan - in Asia? Inagaki’s 1958 ‘Scope and colour remake Muhomatsu no Issho/The Rickshaw Man, with Toshiro Mifune, with whom he worked regularly, is among the best films of the great decade of Japanese production and that film’s best passages, those covering Matsu’s relationship with the child’s mother, correspond to the material missing from the surviving version of the 1943 film.  Tsumasaburô Bandô 's lead, both stupid and knowing, would be an even more outstanding performance if we hadn't seen Mifune's take on the same character.

Even cut, Matsu the Untamed was considered the most accomplished Japanese movie of its year in the Kinema Jumpo poll. It’s not hard to see why. It is a beautifully shot and staged costume drama set in 1905 Meiji period Kokura, the home of Miyamoto Musashi incidentally. Then major star Bandô gives Mifune a run for the money.

The teeming visuals lead you to feel that life is continuing outside the film frame and sometimes they move the camera to prove it is -  entering the Theatre, opening a scene with the flying kite, sports meetings, street markets, a Gion drum festival procession. The motif of the lead's turning rickshaw wheel continually dissolves with the film’s imagery.

The opening has the uniformed police officer, whose appearance scares the kids playing in the street, asking for Rickshaw Man Matsu the Rowdy. We’ve seen Bandô waking with a hangover and we hear about his fight with the white solar topee police kendo instructor who downed him with a stroke of his cane.

Kokura Rickshaw Men were traditionally entitled to enter the local theatre where the audience sits on the bare floor. Bandô refused, has forced his way in, setting up his cooking pot offending the spectators round him with the smell of garlic. This develops into a brawl and Bandô is called up in front of the official who finds that the Rickshaw man’s repentance is already a compensation for the inconvenience he caused the audience members, the official thus keeping face - we’re already in another world.

The plot proper develops when a young boy falls off his stilts and Bandô takes him, crying, back to his home in the up-market area. Bandô tells young Toshio/ Hiroyuki Nagato not to weep recalling his own grief after walking barefoot from the home of his evil stepmother to the distant Kokura bar where his father was drinking with friends. Bandô claims that he never cried after that. We learn that the Rickshaw Man’s father later perished from alcoholism the way the Matsu himself anticipates he will die.

The friendship with the boy develops with Bandô defending him in street fights, taking him to the baths and streaking away to victory at the foot race watched by Toshio and his mother Keiko Sonoi. This bond deepens when Yasushi Nagata the boy’s father dies.

There’s a nice comic scene of  Bandô’s bowler hatted rickshaw passenger distant, leaping up and down in frustration, abandoned to take care of the boy. The gruff rickshaw man greeting him as “Bon Bon” embarasses the kid, as mother Sonoi explains to him. In the cut version she is marginalised, though we do get the scene of her coming to the bar where the Traditional Japanese woman poster hangs on the wall. Bandô expresses regret that his lack of education stops him helping raise the boy who is placed in a privileged Goko school - great static of the train carriages pulling away through shot, faces isolated by the windows.

This cut version climaxes with young adult Toshio bringing back his teacher for Kokura Gion Daiko Day (mum expected his important guest to be his girl). The bespectacled teacher is disappointed that the lack luster performers on the parade’s double-sided nagado-daiko drum float can’t do the traditional Gion Festival routine and Bandô climbs up to give a demonstration (visibly out of synch) mixing to legendary cameraman (Rashomon, Ugetsu, Tokyo Olympics, MacArthur’s Children) Kazuo Miyagawa’s set piece of forty six superimposing shots montaged in camera without the aid of an optical printer or light meter, the spinning Rickshaw wheel becomes a semi-abstract link.

The similarity to Les Enfants du Paradis and Romanze in Molle from the same year - black & white,  detailed period setting, feeling of regret - is a curious reminder they that they are simultaneous. Any historical comment on WW2 is inferred rather than hammered as is evident in the comparable Mizoguchi The 47 Ronin about the glory of dying for the emperor.

Matsu’s lab work is uneven but far superior to that of the later occupation period and the copy on YouTube at least suggests the excellence of the original. It is extraordinary that a film of this quality was butchered by Japanese authorities and ignored by Western critics. Hard to say which is most inexcusable. 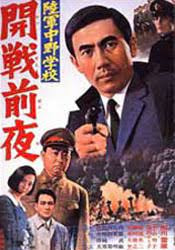 Yasuzô Masumura’s 1966 Rikugun Nakano gakko/Nakano Spy School/The School of Spies  is set at the time of the Sino-Japanese War in the late thirties, opening with newspaper headlines describing, among other events, the fall of Nanking.

We kick off with uniformed graduate Raizô Ichikawa (Enjo/Conflagrationand Nemuri Kyoshiro in the popular Sleepy Eyes of Death series) kitting himself out with his military sword, to the admiration of his fiancée Mayumi Ogawa (Fukushû suru wa ware ni ari/Vengeance is Mine,1979) and mother Sachiko Murase to report for his service at officer school where his new superior, Captain Daisuke Katô (the chubby member of the 7 Samurai) puts him through a disturbing, fast interrogation. “Would you deny a naked woman?” He learns that he is being recruited to a unit of 17 young men who will be trained at the Nakano school as the Nation’s special spies - not military officers or university degree holders but people able to use more personal skills, as the focus of espionage shifts from Russia to the British and US for the impending war. They are told they are as valuable as an army division.

When there is a suicide, some of the remaining young men question whether their anti-social skills training, lying and murder, are justified when they will only advance a new colonisation, with Katô convincing them that spreading Japanese values is an idealistic goal. No religious underpinning here. They buy the package - his scheme is worth not only dedicating their lives but also throwing away their futures. We are getting close to Mishima here.

The group becomes intent on their task, choosing to study in the evenings rather than to party. Their instructors include a paroled master burglar who trains in lock picking and experts in concealed camera work and poisons - slow acting rather than the sudden death variety. Each has to learn two professions and two foreign languages. A chef, a tailor and an English speaker train our hero. Fiancée Ogawa is told our hero has been shot for expressing anti-military sentiments but she won’t swallow that and gets a job as typist in the HQ decoding division to look for him.

One of the spy group becomes attached to a bar hostess and steals his associates’ swords to sell for her up-keep. They tell him he has disgraced the school and their sensei Katô and call for ritual seppuku which he won’t come at, so they settle for him running on a sword they hold. Now shaken they are offered a chance to quit which some decide to take but Katô rallies the group by citing the WW1 Master Spy Admiral who successfully used “empathy” rather than violence to penetrate the Russian hierarchy.

Katô approaches their commanding General  for more resources and is met by the scorn of Capt Kyôsuke Machida  the chief officer of  the underfunded decryption service, unable to match the US military code breakers with their hundreds of workers. Machida is attracted to the fiancée now on his staff.

The division is given the task of getting the manual of British Code that Machida can’t crack and Ichikawa uses his new skills to do this. All the subterfuge proves futile as the book becomes useless when the secretary, convinced by her British former boss (resident Anglo Peter Williams) that the military are leading the country to disaster, tells him the code has been compromised needing a switch to a new cypher. Machida throws the now useless code book on the Commander’s table.

However, our hero visits Decryption and sees the Ogawa in the typing pool. Suspecting her activity and, snatching her purse in the street while concealing his identity, he gets the coded message Williams has slipped her at a concert.

The flat hat military police strike and out comes the cyanide ring. Katô outlines to Ichikawa the torture and sexual defilement the girl faces at the hands of the secret police. The film is getting deep into perversity. Ogawa finds Ichikawa at her door and is ecstatic as he proposes they share a marriage vow, with her undressing for their night together - sequence ends with the film’s one departure from realism, darkening to show her body illuminated against the black ground.

The status and funding of the Nakano unit are established and Capt. Machida, guilty of hiring the girl spy, is transferred to the front and ordered to get himself killed in action while Katô congratulates our hero and sends him on the train to his first posting, told not to allow himself to die. The film ends abruptly.

Nakano Spy School’s most interesting concept is spy master Katô who builds unshakeable confidence in himself as the group’s sensei while inwardly tortured by self-doubt and the knowledge that no one has attempted his task before. The actor rises to the challenge creating an almost sympathetic persona. The spy trainees with their short back and side haircuts and sixties suits are barely differentiated. This is an exceptionally bleak movie depiction of espionage, free of any release through heroics or humor. The makers’ post-war era condemnation of the military is unshaded and not quite convincing but the sombre extreme to which they take their argument startles.

Director Masumura (The Precipice) has a small following for his Sam Fuller-like twisted output.

Sharp B&W scope images are expertly deployed and the music is subdued. Design curiously excludes period detail - no streetscapes with rickshaws and parasol girls in this one.

The YouTube copy of Nakano Spy School(click to view) is exceptional - sharp and having a full range of tones.