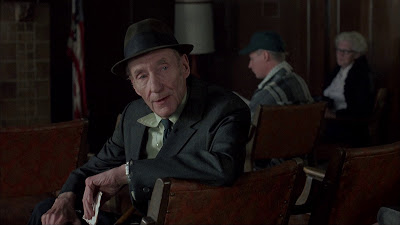 William Burroughs (above), no less, with Matt Dillon (below) in Gus Van Sant's second indie feature Drugstore Cowboy (1989).
It comes three years after his first feature, mostly in black & white, a great gay odyssey into spit and vaseline, Mala Noche, which later led to Gus' career being revived in the nineties by MK2 in France, which ended up producing among other things his still undervalued "death trilogy", Elephant, Last Days and Paranoid Park.
He is seemingly missing in action these days although his hand is always in there somewhere, still a photographer of very great distinction, and a frequent mentor to budding indie/queer talent like Kelly Reichardt and the beginnings of her feature career with Old Joy in 2006.
Gus is as far as you could get from a red carpet Hollywood type.
Posted by Film Alert 101 at 14:17