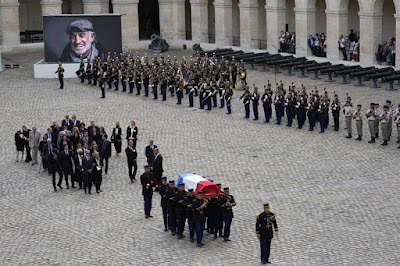 In an unprecedented tribute to a show business personality, President Emmanuel Macron took over the vast central courtyard of Les Invalides, the military hospital built by Napoleon but now the nation’s military museum, to celebrate the life and achievements of Jean-Paul Belmondo.

Watched by a large invited crowd of celebrities and under the eyes of a giant colour blow-up of Belmondo as a grizzled, bearded poilu or footsoldier from one of his last films, President Macron reviewed the band of the Republican Guard as it played an appropriately funereal arrangement of a melody always associated with the actor - Ennio Morricone’s Chi Mai, the theme from George Lautner’s 1961 The Professional.

Then, to the repeated ruffle of muffled drums, his coffin, draped in the tricolour (and followed by a soldier carrying a board on which rested his meagre honours), was carried with painful slowness to the centre of the vast open space and left there while his grandson and then Macron eulogized him for a crowd wilting in the afternoon heat. 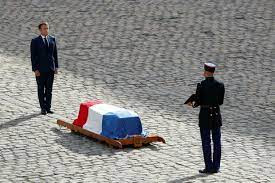 Macron’s  surprisingly heart-felt tribute called Belmondo “a man of a thousand faces” who lived life “between drunkenness and tenderness” and enjoyed the affections of numerous beautiful women. The torch he lit as a representative of France was passed to such actors as Jean Dujardin (who was among the guests, and visibly moved) . “He was the friend that everyone wanted to have,” he concluded.  “Adieu Bébel".

With the installation of Josephine Baker in the Panthéon, planned for November, this ceremony represents a new enthusiasm for show business on the part of the executive, which has tended to shun that element of the culture in recent years. However, as one mourner told a TV reporter, the three greatest Frenchmen of the twentieth century were, in his opinion, Charles DeGaulle, Johnny Hallyday and Belmondo, a view probably more widely shared than one might imagine. And with the national elections approaching, Macron can use all the support he can get.