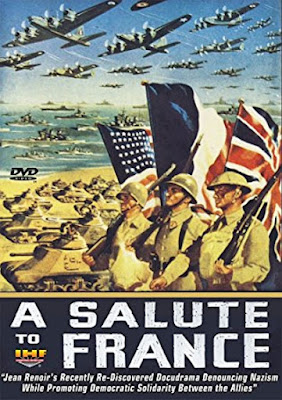 Lockdown has provided an extended opportunity to plumb the depths of the Movies’ Sargasso Sea, their elephant’s graveyard, the one they call YouTube. Anyone can put in his thumb and pull out something plum. Think about all those bits and pieces that were never intended to survive beyond their first showings?

Take 1944’s A Salute to France (Click here to view) , directed by Garson Kanin & Jean Renoir from a script by Renoir, Phillip Dunne and Burgess Meredith and scored by Kurt Weill - a genuine curiosity, a medium length propaganda film we must assume was made for Allied forces distribution with the possibility of slipping into theatrical.

On a studio-built fragment representing the railing of a troop ship headed to Europe, three soldiers sit smoking. American Burgess Meredith is in conversation with Britisher (!) Philip Bourneuf, with Frenchman Jean-Pierre Aumont perched behind them. They discuss words in common between languages when Aumont’s English proves better than Meredith’s phrase book.  We trace their backgrounds with a glimpse of their careers - “whatever Joe was, he’s fighting to do it again - or something better.”

Jean-Pierre resents Meredith’s implication that the Frenchies left the fighting to them and launches into a history lesson for them (and the audience) with four wars between the Germans and the French in a hundred and fifty years.

The home life scenes go dark and the narrator’s discussion of words like liberty, equality and fraternity are drowned out by a lip synched Adolph Hitler on about the master race, with a montage of propaganda footage (spot Confessions of a Nazi Spy in with all the actuality). The Hitler raised hand salute dissolves into a canon pointing sky wards and a montage of battle activity. “Wonder why us democracies never get ready for a war?” “Science, like religion, belongs to everyone” “Some understand war better than peace” to go with a collage of collaborators, the Fighting French, prison camps, scuttling the fleet at Toulon and De Gaulle as against Petain “the hero of Verdun” who didn’t stand out against the executions and deportations.

We see more dramatisations, notably ones with Aumont who gets to do all the work in this one - a speech in front of the firing squad or playing a country priest who gives downed fliers a meal before putting them into a small boat manned by the secretary of the local Communist party and the son of the Chateau, to be taken across the channel, with the wind-up rousing Weill “The Song of Liberation”.

We can only speculate on Renoir’s participation, the division of labor, but Kanin had a flair for these. His one-reel Ring of Steel voiced by Spencer Tracy and Fellow Americans (with Jimmy Stewart) remain imposing today. Like them Salute to France is very much of its moment. Even now it’s possible to be carried away by this one with its pared down, Hollywood view of history and use of film form.

Everybody did cowboy movie compilations in the days of Black and White TV. Terry Sanders’ They Went That-a-way in Wolper-NBC’s Hollywood and the Stars series starts with Japanese cowboys shooting it out in front of a barbed-wire fence sign reading “OK Corral.” Kevin Brownlow’s later Hollywood series has its Out West ep. My favorite remains the jokey 1965 Canadian CBS Wayne and Shuster Take an Affectionate Look At The Westerns. Reb Russell used to tour fan conventions with his copy of an ABC half hour which he treasured because it had footage of his old cowboy actor friends, though it treated his own appearance with little sympathy.

The Westerns came first. Then important frontman Dave Garoway in an armchair in front of a suspended globe telling us about “the cowboy - free of women, property and society” doesn’t really add much. However an aged Bronco Billy Anderson remembering being busted when he tried to mount a horse from the wrong side for The Great Train Robbery is more like it. The film runs to a joke card game between Anderson, Gabby Hayes and Walter Brennan in the saloon at Gene Autry’s Radio Ranch.

However, there’s more. They got a monologue by John Ford at ease in front of the camera, even if what he does is a piece that sounds pre-scripted by the press office and comes over as self-congratulating - he likes She Wore a Yellow Ribbon best of his westerns. It’s interesting to hear him speak. He says he never hurt a horse on one of his film and it is confirmed by the Humane Society Representative.

There’s a scene of selecting and training a movie falling horse with them asserting as much money is spent on those as on a steeplechase winner.

They claim Gunsmoke’s John Meston came up with the phrase “Adult Western.” James Arness, in character as Matt Dillon, does a fight with a stunt man for them in a single take without editing.

High point however is the  trip to location for The  Hanging Tree where they interview Delmer Daves, who is the best they’ve got at doing this. His talking about “learning the need to come to the desert alone” registers as being the considered voice of someone who's spent a large part of his life thinking about the program’s subject.

Gary Cooper and Maria Schell are interviewed and, apart from being ultra-winning, Maria does the formidable feat of arriving in the charged scene with emotion at full pitch after taking just three steps.

Jay Silverheels cites Daves’ Broken Arrow as the first intelligent presentation of the American Indians (we didn’t have native Americans when they did this one). That’s a bit rough on films like George B. Seitz’ 1925 The Vanishing American or Alan Crosland’s 1934 Massacre.

Live TV coverage was still dodgy unfortunately. The quality of the “kinephoto” copy is poor, complete with “black halo”. There are lapses like cutting to the Tim McCoy poster at the wrong moment or the Stagecoach sound track intruding before it’s called for. Their selection of excerpts is over-familiar and their best moments pass without comment - Schell’s three steps or Arness’ fight.

However, while Garoway, producer Ted Rogers and writer Harold Azine’s understanding of cowboy movie history may be limited, they do show a sense of the moment they are recording - when it was already Twilight on the Trail. The ending offers the main street of Radio Ranch with a column, headed by Cooper, Wayne and Autry striding ahead of TV cowboys, James Garner prominent among them. That’s as iconic an image as we are ever likely to get. Imagine actually being there.