Bruce Hodsdon on the Cinema of Douglas Sirk - All that Sirk was Allowed (9) - Sirk, Auteur, Part One

Editor’s Note: This is the ninth part of a planned thirteen part series about the German and American master director Douglas Sirk (Detlef Sierck). The previous parts were published on

Bruce is a long time cinephile, scholar and writer on cinema across a broad range of subjects. The study being posted in parts is among the longest and most detailed ever devoted to the work of Douglas Sirk. In the following text films in Italics are regarded as key films in the director’s career. References to authors of other critical studies will be listed in a bibliography which will conclude the essay.

Sirk's history as an auteur is centrally located in the last full decade of the studio system, producing films for consumption in a society still more or less complacently oblivious to the growing crisis at its core. In this climate of flux the on screen strategies of Minnelli and Ray and especially Sirk seem in retrospect prescient of the challenge to the conventions of classicism as the dominant story telling mode in Hollywood films (unrecognised at the time) and the end of the studio system marked by films like Bonnie and Clyde, Easy Rider, Chinatown, The Graduate, Nashville and Taxi Driver in the transition to the “New Hollywood” of Penn, Nichols, Altman, Pakula, Pollack, Rafelson, Ashby, Scorsese, Coppola et al.
Irony. The commercial success of Sirk's films masked the challenges to classical narrative they contained, a challenge that nevertheless was subsequently somewhat overstated. Thomas Schatz, for example, goes so far as to claim that in resolving a love story Sirk “left unresolved the contradictory social conditions in which the story was 'embedded' and had prevented the lovers' embrace until some arbitrary event near the film's end...(the) resolution is ultimately emotionally unsatisfactory, challenging the viewer's expectations on virtually every level of engagement” (my italics). Illustrative of such a claim are the love stories in All That Heaven Allows and There's Always Tomorrow.  None more so than in the couple's 'reconciliation' in the final scene of Heaven. The pronounced positive/negative asymmetry in the naïve pastoral spontaneity of the gathering at the Anderson's house contrasts with Stoningham's 'fossilised' bourgeois society, suggesting a covert ambiguity in the film's portrayal of the 'excesses' of both extremes in middle America. The barriers to Cary's crossover lie more embedded in social difference - the move from Cary's milieu to Ron's - rather than age difference. Is Cary's great ambivalence about their future really resolved by the deus ex machina of the accident?  The reversal of roles – Ron bedridden  and Cary nursing him – at least postpones the equalisation of their prospective lives as a couple in the alternative culture.  In the idyllic framing of the end scene the ironic 're-sexualistion' of the older woman is achieved by the object of her desire's sudden dependence on her but this, Mulvey suggests, may well be only temporary given the doctor's prognosis. In contrast, the pathos in the parting of MacMurray and Stanwyck at the end of There's Always Tomorrow is overt, the “noble” sacrifices are, Molly Haskell concludes, “absolutely wrong choices made according to notions of duty and happiness that go against not only self-interest, but the interests of everyone else involved.” In The Tarnished Angels and Imitation of Life the sense is not so much of conflict being resolved as of being at least temporarily, ambivalently suspended. Intensification comes close to parody in Magnificent Obsession which, at crucial moments, is saved from absurdity by the affective aspect of Sirk's mise èn scene which is informed by his serious interest in and feeling for the emotional resonances of the Wyman character's blindness (one of Sirk's cherished projects was to set a film in a blind persons' home) and a certain fascination with the spiritual dimension, a kind of 'craziness' drawn from the novel.

Variations on Sirk's ironic 'happy unhappy' endings leaving the viewer to reflect further after the end titles, can be found in all of Sirk's Universal family melodramas with the exception of All I Desire (see note on the film above). One wonders how many of the audience actually mined below the affective emotionality of the surface in response to felt ambivalence which is perhaps most strongly ironic in Imitation of Life (see information about its reception in the note). Irony of a somewhat different order is given full rein in the endings of the early films in America on which Sirk had a free hand in both the making and choice of project and shaping of the script - Summer Storm, Scandal in Paris, The First Legion – later given a tragic dimension in the long dark night and the grey light of morning following Roger Schumann's death in The Tarnished Angels and the cruel yet tender end to Sirk's penultimate and most personal film, A Time to Love and a Time to Die. “Only things that are doomed,” reflected Sirk,” can be so painfully tender.” (144)

Mise en scène. Drawing on Thomas Elsaesser's melodrama essay (Motion 4), the Hollywood aesthetic maintains a priority of “invisible storytelling” through direct emotional involvement of the viewer, “a global strategy of the ideology of the spectacle that is essentially dramatic (as opposed to lyrical or dealing with mood or the inner self) and not conceptual (dealing centrally with ideas, perception and cognition),” requiring the creation or re-enactment of situations the viewer can identify with and recognise. Such a cinema depends on the way 'melos' is given to 'drama' by means of music orchestrated with lighting, montage, visual rhythm, décor and style of acting.  This is encapsulated in the notion of mise en scène - the way character is translated into action - a strategy rarely more fully realised and generic limits tested than in the fifties by the visual rhetoric defined then by auteurs such as Sirk, Minnelli, Ray, Cukor and Preminger which links to the mise en scène of Renoir, Lang and Ophuls, for example. This involves what Elsaesser terms “the intensification of everyday actions, the heightening of the ordinary gesture and a use of setting and décor so as to reflect the characters' frustrations. Violent feelings are given vent on 'overdetermined' objects'.”

Symptomatic for cinephiles was the critical neglect of the importance of style in favour of the novelties of a 'new' realism that surfaced in American cinema in the fifties in b&w and the narrower screen aspects, a counter-programmed response, it would seem, to the widescreen in colour (1.85 -2.55) strategies of Hollywood 'illusionism'. In cinephilic circles the critical establishment was then seen to be more engaged by the mechanical tele-visuals and variable theatrical strategies of a Delbert Mann or a Sidney Lumet and the pedestrian mise en scène of then prestigious directors like J.L.Mankiewicz, Fred Zinnemann, Stanley Kramer and the impersonal descent into what David Thomson refers to as the “empty visual grandeur” of David Lean's later films.
As a student Sirk studied art history with Erwin Panofsky, a pioneer in relating form and content through iconography in painting and the other visual arts including film.  Sirk's special interest was in painting and a career in theatre under the influence of German Expressionism from which he “tried to escape.” But he did so with a heightened interest in style and its relation to internal subjectivity and the importance of tone and mood. Character motivation was 'placed' through mise en scène - the role of the mobile camera, unnatural rather than realistic lighting, stylised décor, architecture, colour and music. Tom Ryan refers to Sirk's “boredom” with expressionism at that time and “dismay at the gradual shift to more realist forms.” He subsequently identified two nineteenth century painters, Daumier and Delacroix, as leaving “their imprint on the visual style of my melodramas.” (Senses of Cinema Great Directors)

Apparent in Thomas Elsaesser's  exploration of Sirk's mise en scène, together with that of Minnelli, Ray et al (Monogram 4, essay on melodrama), is the use of historical analysis and theoretical modes such as psychoanalysis without giving up expressive accounts of films and while also maintaining the central focus on melodrama as a genre to illustrate “how ideological conflicts can be tailored into emotionally loaded family situations.”

Considered as an expressive code melodrama might be described as a particular form of dramatic mise en scène, characterised by a dynamic use of spatial and musical categories as opposed to intellectual or literary ones...The exaggerated rise and fall in the pattern of human actions and emotional responses is often referred to as melodramatic in the compression of lived time in favour of intensity in the form of a ' melo’ graph'...Within the bounds imposed by coherence, this can swing from one extreme to the other more than is considered realistic or in conformity with literary standards of verisimilitude...Specific values of cinema lie in the skilled deployment by the director
of concentrated visual metaphors and dramatic acceleration rather than the fictional techniques of dilation.

It would be hard to find better illustrations of the linking of iconography (visual motifs and style) with structure through the mise en scène than in Sirk's melodramas. “The felt restlessness in Written on the Wind is connected with frequent rapid cutting on movement.” Metonymies like a plunging crane shot of the yellow sports car drawing up the driveway in the front of Doric columns “crystallises American iconography with decadent affluence and melancholy energy” (Elsaesser, Motion) particularly when it is not an effect deriving from the plot as in the final shot of the film involving the wreath blown in the wind matched with an image of Lauren Bacall behind the curtain in “a desolate fatalism.” Elsaesser notes Sirk's “peculiarly vivid eye for the contrasting emotional qualities of textures and materials.” He combines richly rhythmic figurative patterns of meaning to striking effect which are often not plot driven, as in the example above.  “Everyday actions can assume symbolic intensity, ordinary gesture and setting and décor used to reflect the characters' fetishistic fixations.” Sirk uses a full-circle construction of images in Written on the Wind and The Tarnished Angels to initially suggest entrapment but in the end also the possibility of detachment from the circle in the Hudson-Bacall relationship (the image of Bacall referred to above in Wind and the end shot in Angels of Malone and her son in the plane plane flying away from the pylons for the last time). “Finally there are structural and dynamic continuities and discontinuities where the plot builds up to a collision of clashing sentiments drawn out to greatest possible effect when it happens, which Sirk called the 'rhythm of the plot'.” These are less easily defined but nevertheless “make the film hang together and give it aesthetic shape and thematic resonance.” An example is the Malone dance in Written on the Wind while her father is collapsing on the stairs from a fatal heart attack. Or John Gavin given the brush-off by Lana Turner as they walk down the stairs in Imitation of Life. 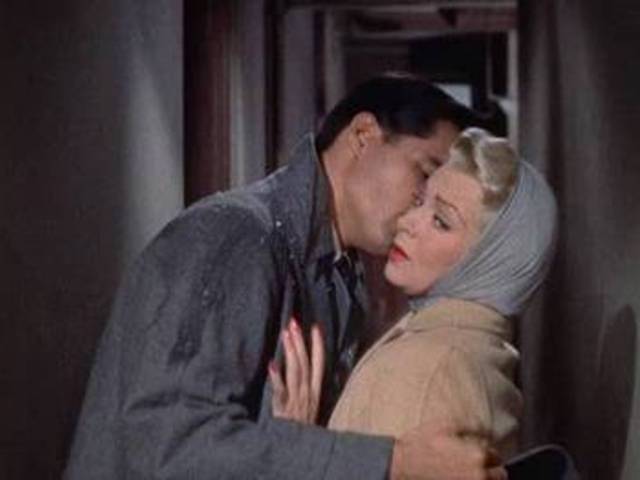