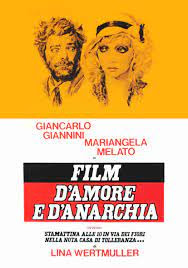 Before I start, I want to acknowledge the Bidgigal people of the Eora nation, the traditional owners of the land on which the Ritz Cinema is on and pay my respects to their Elders, past, present and emerging.

I’ve so greatly enjoyed thinking about Wertmüller’s Love and Anarchy for this event, and so I want to thank Jane Mills for her invitation, and for allowing me to be part of all of this. I also want to commend the Ritz and Cinema Reborn for supporting these retrospectives, which are just such an important part of making film histories visible and meaningful.

The film has a very long and playful subtitle, which is a hallmark of Wertmüller’s cinema – and I’ll leave you to discover that in the opening credits. Like the best auteur cinema, Love and Anarchy is inextricably connected to its filmmaker. And Wertmüller has a special place in cinema because she’s part of that astonishing wave of great Italian art cinema of the 70s – consider Luchino Visconti’s The Leopard (1963) or Federico Fellini’s Amarcord (1973), two of my favourite films. But alongside these grand auteurs, Wertmüller has been called iconoclastic, radical, a radical feminist – a subversive stylist – and an all-round prickly filmmaker. There’s a lovely moment at the 2019 Oscars during which she received an Honorary Award. In her acceptance, again, playfully, but with some meaning, I think, in light of the fullness of her career, she suggests that she wishes to change the name “Oscar’ to a feminine name. And the audience laughs. But it’s a powerful moment and declaration, particularly at the point of commemorating an entire career.

Love and Anarchy was released in 1973, and at the height of Wertmüller’s stature as a director. It also returned to themes that had been central to her earlier works. The film is set just before the start of World War II, during the fascist reign of Mussolini. And that time period is crucial, because setting the film in this time and place establishes a lineage to other great Italian films, such as, for example, Roberto Rossellini’s Open City (1945), or in fact the entire canon of Italian neo-realist films that had influenced Wertmüller. You could also situate a film like Pasolini’s Salo (1975), released only a couple of years after Love and Anarchy, within this Italian cinematic tradition. So from the outset of Love and Anarchy, there is an explicit identification with an Italian political cinema of the 1940s and onward, and the fascist-era setting (and the tragi-comedy of the political hijinks), marks the enormous ambition of this film.

Wertmüller has been described by critics and theorists as a “knee-jerk” or unsubtle feminist and political commentator. Her movies are melodramatic, excessive, broad, often “messy” – which is Jane Mills’s fantastic term (one of the curators of this festival) that so aptly describes Wertmüller’s body of work. It is true that Love and Anarchy is largely set in a brothel, that its main characters are, in some sense, caricatures or larger than life figures. There is a fantastically playful sequence in which Wertmüller’s camera captures the energy of the brothel in a dazzling array of shots, frenetic cuts, weirdly subversive framings, and so on. Even the film’s style is excessive, or exaggerated, at times messy.

And yet what remains resonant about Love and Anarchy is that Wertmüller seems as interested in the ribald discussion of the goings-on in the brothel as she is in the anti-fascist resistance to Mussolini as she is in the broad satirizing of the hyper-masculinity of Patoletti (played by Eros Pagni) – in a gloriously excessive performance. My sense, therefore, of the achievement of Love and Anarchy, and the real pleasure of spending some time with it, is that, despite what many critics view as its crudeness as a political statement (with which I disagree), or a genre film, or a melodramatic farce, or a feminist treatise – that there remains such a poignancy and passion in the drama itself. And what I love about the film is that Wertmüller never sacrifices the elegance and beauty of this drama for the clarity of an overarching political message.  In my opinion, such an emphasis on a transparent political agenda would severely diminish the film. And Love and Anarchy is a very rich film indeed.