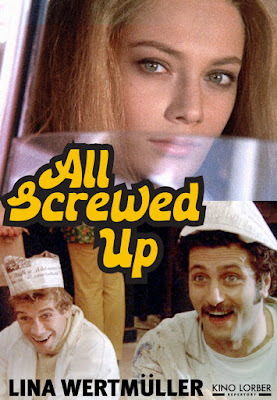 I acknowledge the Bidgigal people of the Eora nation, the traditional owners of the land on which the Ritz Cinema is on and pay my respects to their Elders, past, present and emerging. Their lands were never ceded. Always was, always will be, Aboriginal land.

Hi, my name is Danielle McGrane.

I’m a film and TV critic and pop culture reporter for ABC Radio Sydney and a presenter on ABC Classic, and it’s a real pleasure to be here today to introduce this film, All Screwed Up, from Lina Wertmüller.

I’d like to thank Jane Mills, Associate Professor at UNSW for asking me to be a part of this retrospective. I’ve had an interesting few months digesting Wertmüller’s work and learning more about her.

When Jane pitched Wertmüller’s films to me she didn’t shy away from the fact that she can be a divisive character - interestingly to people from both sides of an argument. She’s been accused of misandry and misogyny but Jane also promised me she was outrageously sparky, funny and over the top - so really how could I resist?

She wasn't wrong.  In fact, when I first started watching her films I was struck by her utterly unique characters. These were people who weren’t afraid to show their emotions - they could display a wide-eyed innocence in one scene and an utter cunning in the next.

It’s no surprise that when Wertmüller worked with Fellini on 8 ½  he asked her to find the extras - he wanted the faces of real Italian people - and she obliged. And I think she’s managed too to find those real characters for her own films.

I also love how she frequently and unapologetically looks at things from the male perspective - men are often the protagonists while women are more like satellite characters. But at the same time, the women never seem like adornments - and as you follow her films on a timeline you catch these glimpses of how women are beginning to change and forge their way out of the kitchen and home, and into the workplace and more emancipated world - even in the most patriarchal of Italian societies.

I’m excited that we’re watching All Screwed Up today because it’s in this film that I really feel women are starting to take back some of the power - sure there are some triggering moments, but there’s a real sense of change in the air; the women in this movie are using their domestic prowess and even their sexuality as a commodity that they’re in control of for a change.

It’s Milan in 1974 - this is the year Italy held its first referendum on divorce and the people voted heavily in favour to keep the law which had come into effect in 1970. This referendum was heavily supported by the Catholic church and the Vatican - and take it from someone who comes from a Catholic country, the fact that divorce was allowed to remain was a big deal.

So a synopsis of this film will tell you it’s about two country boys, Gigi and Carletto, who come to the city to make their fortune. But I think it’s really about a society in flux, one that’s moving into a more emancipated way of life.

These young men end up living in a sort of commune with other young workers from the country, most of whom happen to be women. Watch, as I mentioned earlier, how the women maintain control over the men as much as possible by using their domestic and sexual skills. It's amusing, but also ingenious, how they do it.

I like to think that a lot of their ingenuity and agency is an extension of Wertmüller’s. In a recent interview, she said that when she started making movies women had only just started working - and there were social rules that said the husband brought home

his salary, and the wife took care of educating the children and running the household.

But she refused these bourgeois rules, and so too do a lot of her characters. They find different ways to forge their own path, much like Wertmüller. She’s also not afraid to be political - when it comes to the terrorism that was being waged in Italy at the time between the far left and the far right, Wertmüller’s characters are all too aware of it and even get involved. The workers march, they argue, they take sides.

In this film, this commune is in a fight to exist against developers who want to turn it into another skyscraper - Wertmüller is always telling us what’s going on in society, and how it affects the working classes. 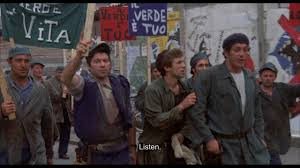 So as a director she's a trailblazer with a keen eye. She’s unafraid to be completely herself. She doesn’t care if she pisses off one side or the other, and I have to agree with Jane - she’s gloriously funny, sparky and over-the-top.

It also feels like the right time to be celebrating her particularly as the first woman to have been nominated for a best directing Oscar back in 1977. Because this year two women have been nominated in that category - Chloé Zhao for Nomadland and Emerald Fennell for Promising Young Woman, and I’d be very surprised if Zhao doesn’t win it. It’s taken a while but it does feel like we’re finally making progress when it comes to recognising women in filmmaking.

So, if we’re to take our lead from Wertmüller and continue to blaze a trail, the message here for everyone is to be authentic - and don’t worry about trying to keep everyone happy.

Every character in this film is flawed and loveable, inspiring and disappointing - I guess you could say human.

Enjoy All Screwed Up after a little message from Wertmüller herself.