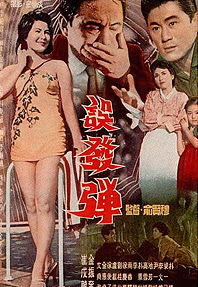 The film culture of South Korea was a virtual closed book until the end of military dictatorships and the introduction of democratic reforms in the early 1990s. When the Busan Film Festival was launched in 1996, one of its top priorities was to document and study Korea’s own film history – and to honour surviving directors from the fraught decades after the Korean War.  The dramatic relaxation of censorship after the change to non-military government in 1993 made it possible to examine that period with new candour and clarity, even if the continuing tensions with North Korea left many critics and commentators unable or unwilling to think entirely freely. But the new initiatives to rethink Korean film history immediately ran into a major blockage: so much work from the late 1950s onwards was irretrievably damaged or lost.

Probably no other film ever screened in this festival more deserves the word “reborn” than Yu Hyunmok’s Aimless Bullet from 1961.  The film was recognised as an important achievement when it was made, and a number of damaged 35mm copies (plus one 16mm copy) survived into the 1980s, when a dupe negative from 1975 was brought into the Korean Film Archive. But the surviving copies all came from that dupe negative, all of the original materials having been lost, and all had mediocre, hand-written English subtitles disfiguring many of the images. (The subtitles were evidently made for a screening in San Francisco in 1964.) When the KFA restored the film in 2014/15, the major challenge was to digitally erase those intrusive subtitles while returning the images to something like their original sharpness and grading. They were not able to mitigate all the damage or restore all the missing frames, but their overall success is spectacular.  A remarkable film has truly been brought back to life.

Aimless Bullet (the Korean title Obaltan literally means ‘Stray Bullet’) offers a discursive panorama of life in the rubble of Seoul in the immediate aftermath of the Korean War through the stories of two brothers: Song Cheolho (played by Kim Jinkyu) is an impoverished accountant with a pregnant wife, an elderly mother left demented by the war and agonising dental problems of his own, while his younger brother Yeongho (Choi Mooryong) is an embittered army veteran, jobless, who spends much of his time hanging out with other veterans, some of them disabled. Their sister Myeongsuk (Seo Aeja) prostitutes herself to American GIs. They all live in a rooftop shed shared with another family. The film’s narrative is linear, but it’s not at all plot-driven: Yu cuts freely between events which have few causal links, carefully building a bigger picture of life in the city’s slums.  The one thing that non-Korean viewers need to know is that these characters are all displaced refugees from the North – disadvantaged newcomers to Seoul.

Yu Hyunmok (1925-2009; his name is nowadays transliterated “Yu Hyeonmok”) was a less prolific director than many of his contemporaries, partly because he resisted censorship and the pressures to make anti-communist propaganda but also because he spent a lot of time and effort on film education and on nurturing a Korean film culture. He was a cinephile, and acknowledged the influence of such films as De Sica’s Bicycle Thieves on Aimless Bullet – which was filmed on location as much as possible. The film was banned soon after its premiere in 1961, because the censors interpreted the mother’s repeated cry “Let’s go!” as a call to return to North Korea, and Yu faced a long battle with them to get the film widely released in 1963. His other surviving films reveal disparate ambitions, an abiding interest in film-form and montage, and skilful approaches to staging.  But Aimless Bullet, his eighth feature, stands as his finest and most provocative movie.