Before we get started, I would like to acknowledge the Bidjigal people of the Eora nation, the traditional owners of the land on which the Ritz Cinema stands, and pay my respects to their Elders, past, present and emerging. I would like to extend this respect to any First Nations people in the theatre today. This land was never ceded, and will always remain Aboriginal land.

Hello everyone and welcome to our second screening for the Seven Beauties retrospective, where we dive deep into the work of Italian auteur Lina Wertmüller. 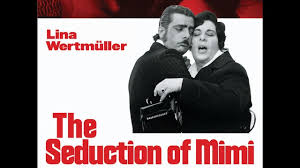 So, The Seduction of Mimi, at least this is the title under which the film you are about to seewas released in the United States in 1972, although a literal translation of the Italian-language title would be “Mimi the metalworker, wounded in honour.” Considering this film is about politicking among the little fish, much like last week’s film The Lizards, I am intrigued by this rebranding—perhaps the American audience attended in 1972, anticipated an Italian romp—and were rewarded with… something different…

The Seduction of Mimí was released towards the beginning of what was a furiously productive decade for the young Wertmüller after a period as assistant director to veteran Italian auteur Frederico Fellini on his film 8 ½(1963). Wertmüller’s debut, The Lizards, was adored by Italian critics for paying tribute to neorealism and to Fellini himself, and yet, it struck at an intellectual, haute-cinema audience, an audience Wertmüller quickly discarded as “conventional.” [1]

Seeing the limited circulation of auteurist cinema, Wertmüller made a critical decision to change her politics and approach, searching for what she called “a popular cinema,” embracing anything, she said that “might enable me to communicate with the people.”

… And so she made this film.

Celebrating the bawdy, tits-ass-and-the-toilet-seat humour of the Commedia all'Italiana genre, The Seduction of Mimí was the first film to translate into international success for Wertmüller, its distinct style reproducing echoes of her work for the Italian state television company RAI in the mid ‘60s, where she directed, among other things, the first musicarello, or “musical-comedy” ever broadcast on Italian TV. The Seduction of Mimí is full of mass-appeal gags, crass humour and a vibrant visual style suited to television, far from the restrained realist aesthetic of her first film.

As a TV scholar, I am transfixed byWertmüller’s juggling act with a host of Cold War ideologies, including communism, feminism, and Trotskyism, knitted together in a vibrant explosion not unlike a musicarello (without the dance breaks). Wertmüller, a staunch socialist and provocateur, is clearly working within the remit of a specifically Italian Socialism here, where notions of comradery include both the family and The Mob, an adherence to Omertàthat slowly but surely irritates Mimí the metalworker’s “wound of honour.”

As Sergio Rigoletto notes, Wertmüller’s films are “very much in the Italian film tradition of post-war populism going back to Luigi Zampa and Giuseppe De Santis,” Wertmüller’s films “aim to raise the consciousness of vast masses of ordinary spectators around particular social and political issues.” [2]

This objective is pursued through the use of standard televisual humour, where comedy is easy, with mass appeal. In The Seduction of Mimí, an overweight woman’s ass wobbles comically in front of a wide-angled shot to antagonise the conventions of appropriately sexualisedfemininity, and a generation of related mafiosos often hover just out of frame, their three familial facial moles representing Mimí’s expected devotion to his country, church and “family.”

The film you are about to see is a desperately risky move on the part of Wertmüller, as she alienated critics in her home country. These critics saw The Seduction of Mimí as a degradation or regression, ignoring Wertmüller’s attempt to try and connect with Italy’s working class, people just like Mimí, who she saw as key to progressing society forward, though they were trapped between esoteric ideologies. In making this sacrifice, Wertmüller, according to Rigoletto) brings into “critical focus” the “limitations of the categories” normally invoked in the study of popular and art cinemas whilst complicating the “often taken-for-granted assumption about the spontaneity and the lack of artistry of popular cinema.” [3]

I wholeheartedly agree, and am so excited for you to watch what I think is Wertmüller’s most ambitious and original film. Enjoy.

Dr Blythe S Worthy is a postdoctoral researcher and tutor at the University of Sydney. She is Documentary, Film and Television Editor at the Australian Journal of American Studies and Coordinator of the Sydney Literature and Cinema Network. Blythe will also be introducing Lina Wertmuller’s SWEPT AWAYwhen it screens at the Randwick Ritz at 4.00 pm on Sunday 25 April.