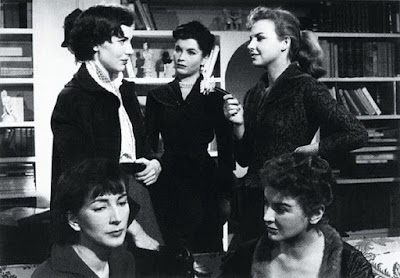 Below is an extract from a longer critical essay written by Jane Mills for the screening of Michelangelo Antonioni’s Le Amiche at CINEMA REBORN on Friday 30 April at 6.30 pm at the Randwick Ritz. The complete essay may be found IF YOU CLICK HERE. BOOKINGS CLICK HERE

Le amiche might come as a surprise to audiences aware only of Antonioni's celebrated films of the 1970s expecting his trademark extremely long takes, large empty spaces, massive architectural structures and long, deep focus shots in which characters, forever thwarted in their search for emotional and spiritual sustenance are dwarfed and alienated in soulless urban and rural landscapes. At first sight, apart from the main character, Clelia, (Eleonora Rossi Drago) who provides a moral centre and central viewpoint, what we see in Le amiche is a gaggle of wealthy, bourgeois, mostly mean, gossipy, amoral women, their husbands and lovers, whose concept of friendship is severely limited and whose interests and chatter rotate around love, sex, money, status and the latest fashion in couturier ball gowns. The film most certainly has melodrama and in recent years has been compared with the American romantic comedy television series Sex and the City. Which might sound like an almighty cultural put-down. But in fact, purveys precisely one of the films delights.

The lovely, thirty something Clelia (Eleonora Rossi Drago), newly arrived from Rome to set up the local branch of a couture house in Turin where she was born. Preparing to take a bath in her hotel room, she is interrupted by a screaming maid who has discovered Rosetta (Madeleine Fischer) almost dead from a suicide attempt in the next room. This triggers a chain of events that will ultimately end in a successful suicide and Clelia’s decision to return to Rome. But first, Clelia is swept into the social swirl of restaurants and casinos, artists’ studios and parties of four wealthy and vapid, mean and gossipy women, the supposed friends of the unhappy Rosetta: Momina (Yvonne Furneaux), a wonderfully performed whirlwind of worldly cynicism; Nene, a talented but masochistic ceramicist; and Mariella (Anna Maria Pancani), a delightful boy-crazy airhead.

Why did Rosetta attempt suicide? What links her to her friends?  This is not, as one might expect, a simple case of melodramatic cherchez l’homme, although Nene’s partner, the faithless, not very talented painter Lorenzo (Gabriele Ferzetti) certainlyplays a key role in bringing about the denouement. (Ferzetti will play a similar role in L’avventura). Rosetta’s unhappy affair (cynically encouraged by Momina, despite supposedly a good friend of Nene) and its aftermath, all anticipate L’avventura.

The film’s other significant male character, Carlo (Ettore Manni), is the handsome, working class assistant to the head architect, Cesare (Franco Fabrizi). Cesare is designing Clelia’s couturier salon - when, that is, he has time to spare from his affair with the married Momina whose husband we never meet and is the sort of woman who doesn’t mind whom she seduces as long - as they are wealthy and not working class. Apart from Clelia, Carlo is the only character with any integrity. It doesn’t do him any good.

For Penelope Houston, this was his outstanding film of the 1950s and in it she finds many elements of Antonioni's visual grammar: “Already the elements of this fastidious craftsman's style were locked in place: the awareness of landscapes, usually melancholy, the sense of people drifting through time and space, but held always under the tightest control, the persistence of vision.”  Antonioni himself explained: “I need to follow my characters beyond the moments conventionally considered important, to show them even when everything appears to have been said.” According to Houston, this was partly what so annoyed the Cannes audience who booed when L’avventura was awarded the Critics Prize, along with that moral lethargy which seems to overpower his characters, blocking even the possibility of decisive action.

The neorealist strategy of using actual locations are lovingly filmed by Gianni Di Venanzo whose future credits would include  La notte and L'eclisse for Antonioni, La sfida (The Challenge) for Francesco Rosi, and 8½ and Giulietta degli spiriti (Juliet of the Spirits) for Federico Fellini.

Adapted from Cesare Pavese’s prize-winning novella, Tra donne sole (Among Women Only, 1949), suicide frames the film’s narrative: suicide had a significance for both writer and director. In 1953, Antonioni contributed a segment, Tentato suicidio (Attempted Suicide), to an anthology film, L’amore in città (Love in the City). The significance for Pavese was more devastating: a year after publication of this novella, he committed suicide, reportedly because of an unhappy love affair. This may explain why the screenwriters, Antonioni with Suso Cecchi D'Amico and Alba De Cespedes, decided to link Rosetta’s suicide to an unhappy affair rather than leave her motives unclear, as in the novel. Pavese’s suicide would undoubtedly affected Antonioni.

The relationship between the three screenplay writers is intriguing. De Cespedes (who gets a ‘collaboration’ credit) was a best-selling novelist and newspaper agony aunt whose only screenplay credit is for Le amiche. D’Amico was an experienced screenwriter whose credits include films for Franco Zeffirelli, Luchino Visconti, Vittorio de Sica and Francesco Rosi. The writing process was not a happy one. When D’Amico’s script was accused of sentimentalising Pavese’s novella, Antonioni retorted: “I wouldn’t say that D’Amico wrote the script. The script came out of a cooperation between me and [the] two women. D’Amico is not a great writer, but she’s a good writer, She knows the feminine mentality very well, But they hated each other, Suso and Alba, so they never talked together, I picked up some material from one and some more material from the other and then I did the script… the emotional and existential crises of the characters are the same kinds of crises you find in my other films.”

On an unpleasantly ironic note in light of the four women friends’ constant immoral and amoral gossip and innuendo, the Pavese’s suicide note read: “I forgive everyone and ask everyone's forgiveness. OK? Don't gossip too much." 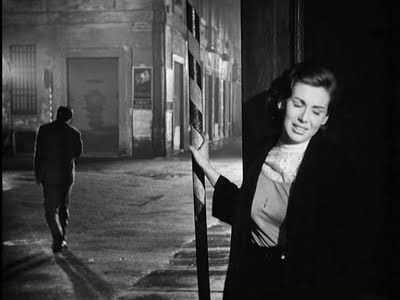