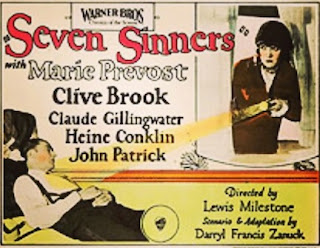 First thing’s first.  There are some cinephiles who will dedicate significant amounts of time to the American silents of early 20th century cinema and blunt their critical faculties just to wallow in the nostalgia of theatrical performances and mood-setting tints. Maybe in the age of cinephile gluttony, where there is a staggering amount available online to anyone with a decent internet connection, the prospect of seeing something rarely seen by others, like a rediscovered silent film, is a cause to get behind and show you’re somehow a cut above all those online commenters arguing on behalf of Joao Cesar Monteiro films or the work of Kajiro Yamamoto.
Whatever the psychology behind this championing of even the most tiresome (and often tiring) silents, there must have been some cinephiles who walked into the Queensland Gallery of Modern Art’s (GOMA) program (on Sunday 20 February) of rediscovered silent classics ready for a masterpiece. Did the world premiere of Seven Sinners deliver on that promise? Not exactly but it’s a cracking comedy; frequently funny, well-paced and Clive Brook and Marie Prevost are terrific as leads.
While I only saw Ernst Wendt’s ok-but-overlong The White Desert (Germany, 1922) and Seven Sinners (Lewis Milestone, USA, 1925) in the program, neither could be said to rank amongst the best of their era. Having said that, Seven Sinners really is a great discovery by Joel Archer and Ron West and will delight audiences as it makes its way to other festivals and home-video formats. (Click this link for an earlier extended report on the discovery.)
World premiering to a decent crowd (tickets were free), Seven Sinners was long-thought gone until a print was found in the collection of West who used to run the Pomona Theatre on the Sunshine Coast. Warner Brothers got hold of the print, scanned it at 4K and then the Academy Film Archive reconstructed the film to best resemble what original audiences would have seen, using press reviews and stills to fill the gaps, given no copy of the screenplay exists.
There is major damage in parts of the film but freeze frames and freshly produced title cards have been inserted to bridge the narrative gaps and thankfully there are very few jumps in the plot; the general thrust of the film is only somewhat halted by the missing material, involving a fight between Clive Brook and John Patrick.
The film’s irresistible premise places a bunch of competing thieves in a mansion over a long weekend as they all try to rob the place. All end up getting trapped inside with a cop patrolling outside. The fun quickly unfolds as each thief adopts a fake persona (butler, cook, house guest, doctor, maid) and fraud-upon-fraud builds as they try and outwit each other for a jewellery haul from the mansion’s safe. There are some humorous gags involving scarlet fever but some of the best jokes involve the fake cook’s atrocious meals and the poor guests who have to consume them. The ending is straight out of Hollywood with its sentimental re-establishment of the moral order but there’s still a witty touch as Brook and Prevost go on the straight-and-narrow by setting up shop as a burglar alarm company.
Milestone would later go on to direct everything from All Quiet on the Western Front to The Purple Heart, Of Mice and Men to The Front Page and even did some of the aviation scenes in Hughes’ Hell’s Angels. Brook also went on to a long career in front of the cameras including roles in Cromwell’s Scandal Sheet, von Sternberg’s Shanghai Express and Underworld, Cukor’s Tarnished Lady and a few turns as Sherlock Holmes. Prevost’s career didn’t end so happily although she appeared in a few Lubitsch comedies and many Mack Sennett shorts. After being dropped by Warner Brothers in the mid-twenties her career began to slide and was soon plagued by depression and alcoholism. She died at age 38 from alcohol-related illness and with virtually nothing to her name.
One final special mention should go to the superb work of David Bailey on GOMA’s 1929 Wurlitzer organ. He provided a note-perfect accompaniment to the action on-screen. Having seen his previous performances at GOMA silent screenings, Bailey really is a critical element in immersing audiences in a film’s magic and has a gifted knack for enhancing mood through his work.


Photos below taken during the screening by Ben Cho 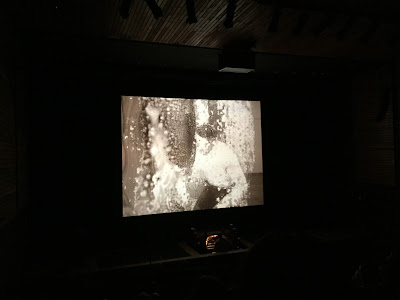 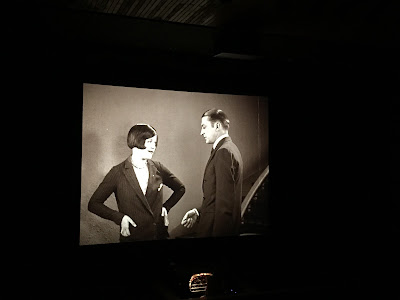