Sex always sells, be it the bare breasted chorus girls at left, or the hunk in the trench coat below (Jean Chevrier as "Perlenjour") who's the prime murder suspect in just the third picture in 1941 to come out of the newly formed Gestapo Continental Films and Boss Alfred Greven, after the German occcupation of Paris in 1940. The movie is Le Dernier des Six, directed by then French journeyman Georges Lacombe who, it has been suggested, staged the extremely daring (for the day) nudity to test the patience of Greven in order to get himself taken off Continental studio's staff roster. In fact it's more likely most of the film's outre elements are attributable to Henri-Georges Clouzot, who did the adaptation of the source Belgian detective novel by Stanislav Steeman, and whose hand shows more than a little in the mise en scene, including a knockout montage of hands enacting group anxiety at 4 minutes into the opening sequence.


Clouzot would go on within a year to finally take director credit for another adaptation for the second Belgian Detective "Wens" movle with his comedic serial killer picture, L'Assassin Habite au 21 from 1942. The estimable Pierre Fresnay took the lead role for both movies. Dernier also marks the debut of a Clouzot fave performer, Suzy Delair who becomes the Inspector's Girl Friday, in between singing some show tunes at the completely amazing niteclub.
Gaumont France has released a 2K restoration of the film in a frequently sparkling new Blu-ray which is also English subs friendly, at least for the feature. I think the movie and the whole Occupation era deserve more attention and it's interesting to see the growing number of revivals and rediscoveries from these restorations. I was hoping to include a review of the new German Concorde restoration of Veit Harlan's 1943 masterpiece, Opfergang in this note but delays will keep that for a later time.
Meanwhile I recommend the disc certainly for fans of Clouzot of whom there must be more than a few out there. I will note some minor concerns with the restoration which makes me believe the post and grading work was again done by Lab Eclair. As the before and after restoration clip shows the original 35mm IP in the raw scan shows not only very good dynamic range (contrast) but healthy grain and sharpness. But In taming the usual emulsion and film based damage the restorers have selectively applied very heavy filtering and/or high frequency noise removal, resulting in quite a few medium and wide shots that look overly soft. It appears that the restoration team was aiming for a "glowing" nitrate pearly look, but the quality of the IP indicates a much "harder" black and white contrast for the original element. Once again the Eclair team seems to be making aesthetic decisions about the appearance of film elements with their new restorations, which do not always have a solid basis in the original reference elements, and Eclair needs to be called out on this yet again. Fortunately the overuse of the high frequency rolloff here is only occasional, and not nearly as ubiquitous and destructive as it was, for instance in the disastrous job performed on Pathe's Les Enfants du Paradis from ca. 2007 or even Canal's heavily softened, overly degrained QuaI des Brumes which was also performed by Eclair three or four years ago. 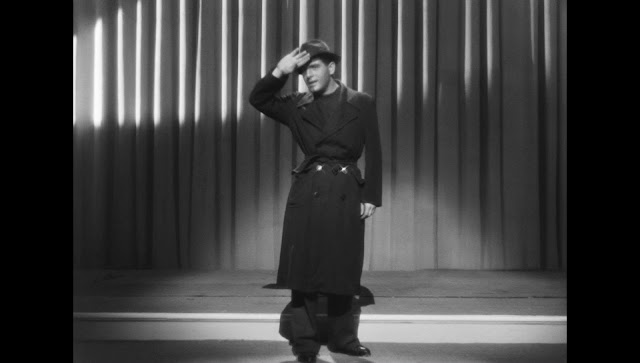