Without Warning! - Ken Wallin retrieves a 50s B Noir 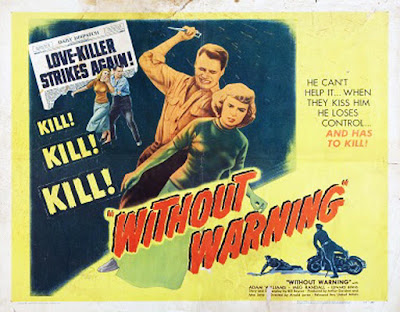 Another little gem in low budget crime movies I've recently viewed and that can be found here on YouTube, is Without Warning! directed by Arnold Laven (his first film I think) in 1952. Like The Sniper from the same year, the plot follows the activities of a serial killer, with alternating scenes of the police work, both forensics and street action, handled in a semidocumentary fashion. Reliable character actor Edward Binns is the leading investigator, while the killer is Adam Williams, in maybe his best movie role. His face was familiar to me but I had to check to be reminded where I'd seen him play hoodlums and henchmen before..... why, in The Big Heat for a start! Williams is ideal for the role of the seemingly sympathetic loner working as a gardener who, after strangling  two blonde young women is drawn to pretty blonde Meg Randall who is helping out in her dad's nursery.

The film is tightly directed and much of its impact is due to the photography of Joseph Biroc, who makes the most of the LA locations in such sequences as a murder carried out beneath a freeway with motorcycle cops observing the isolated car from a background flyover, and the final confrontation at Williams' shack at Chavez Ravine with the LA City hall a distant backdrop.

American reviewers on IMDB have pointed out the value of having these locations on film before they changed so completely, as happened to the Chavez Ravine area where Mexican farmers had market gardens, and which was razed to build the baseball stadium.

I also want to recommend a book which is most helpful in tracking down films like this, Death on the Cheap, the Lost B Movies of Film Noir byArthur Lyons. Good lists, synopses, and short appraisals.

Without Warning is one of the quality prints from the net, presumably taken from a dvd release at some point.
Posted by Film Alert 101 at 02:10