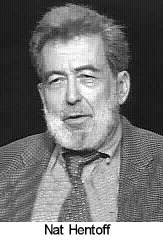 R.I.P Nat Hentoff (June 10, 1925 - January 7,  2017) Very sad news about Nat Hentoff, pioneering jazz /music critic, novelist, historian, columnist and free speech advocate, from Ted Giola. My introduction to jazz criticism and commentary was by Hentoff, Leonard Feather, Raph Ellison, Whitney Balliet, Albert Murray, Martin Williams, amongst many others, but Hentoff was in his own league as a public intellectual amongst these notable music critics.

He was a beacon to many other younger critics, journalists, historians, musicians and broadcasters, and given his lifelong commitment to advocating jazz , free speech and human rights, he was deservedly awarded one of the first NEA Jazz masters awards in 2004 (despite his critical views on government funding the arts, etc).  On this latter point see Ted Giola's post where he mentions the award itself and how Ted 's brother rang him up with the news that this government phone call he was making to Nat would be the only one he would welcome.

Hentoff was the jazz critic for the Village Voice from 1958 to 2009 (!) and he also consummately used the VV also has a platform for his humanitarian issues and free speech advocacy. In his lifetime Hentoff was a blazing columnist and writer for so many other important journals including The New Yorker, The Wall Street Journal, New York Times, The Atlantic, The New Republic, Jewish World Review, etc and for many major jazz journals like Down Beat, Jazz Times, etc, etc. Hentoff wrote over twenty books including many on jazz but he also wrote on general popular music as well (R&B, soul, country and western, etc). Also Hentoff wrote liner notes for early iconic albums by Bob Dylan, Ray Charles, and Aretha Franklin, etc. At all times, Hentoff as an author, activist and columnist, etc, was, to use Duke Ellington's expression, "beyond category" It became his personal creed. 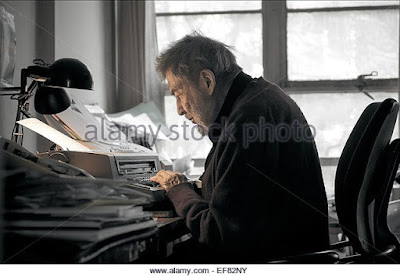 As an iconoclast in his life and writings, Hentoff was fearless, eloquent, passionate and dedicated to his individualistic vision. He went against the establishment, against orthodoxy. In 2014 a documentary on Hentoff was produced The Pleasures of Being Out of Step: Notes on the Life of Nat Hentoff which I have as yet to see. Characteristically, Hentoff situated in his chaotic book lined study was the epitome of someone who endeavoured in so many different ways to share and illuminate our common world of civic freedom, free speech, and the manifold pleasures that music endows our human condition. Hentoff passed away surrounded by his family listening to Billie Holiday. Farewell, comrade.
Posted by Film Alert 101 at 13:40