On DVD - Random Summer viewing (1) - Clearing the backlog - THIS IS ENGLAND 90, IMPASSE DES DEUX ANGES, DUPONT LAJOIE, SLAP THE MONSTER ON PAGE ONE

This is England 90  (Director: Shane Meadows, Writers Jack Thorne and Shane Meadows)
The feature length This is England was set in 1983 and charted the lives of a group of skinheads attracted to the white nationalist movements of the day. Chief and most striking was the sight of the young Thomas Turgoose as the smallest person but most potent image. There have now been two updates of the group as they struggle into adulthood and come up against the reality of British working and underclass life. The latest instalment, covering 1990, has a domestic focus. Lorraine and Woody plan to get married. Shaun (Turgoose, again) is struggling with something he wants to do at college etc. Others are more desperate and inevitably drug consumption and addiction are front and centre. It's done as a four episode TV series from Channel 4 in the UK and, once you get over the grot and miserabilism that is the Britain of today for many film-makers it is riveting home melodrama. There's a kicker finish too with most of the group in celebratory mood but for the disappearance of Combo, the catalyst for much of the Fascist inclinations in the first iteration.

Impasse des Deux Anges (Maurice Tourneur, France, 1948)
Maurice Tourneur's final film, made in 1948 at the age of 72, and ending a career that saw him work for three decades in both France and the USA, is a somewhat forlorn melodrama, a final last gasp of minimal poetic realism set in a studio set Paris. The Impasse ("No Through Road") is a short street which once contained a small hotel where lovers Paul Meurisse and Simone Signoret spent a night before he disappeared. Now, years later, he's back in Paris and his first task is to steal a priceless collection of jewels. Turns out they belong to the same Marianne (Signoret) now a high class star of the stage preparing to marry an aristocrat.  He sees her as he is exiting and it stops him and her dead in their tracks. They take off to renew acquaintances. Memories drift in, rendered as double exposures in the same location. Signoret, in the prime of her beauty, is magnetic. The young Daniel Delorme also has a scene that suggested stardom beckoned... I still don't know who got shot and why in one scene.   We are a long way below Quai des Brumes.

Dupont Lajoie (Yves Boisset, France, 1974)
Never a fashionable name in French cinema, though he did win the prestigious Prix Louis Delluc, Boisset made films and TV for the Boulevards and the networks for over forty years. Hardly a single title made it out here. David Stratton invited this one to the 1975 Sydney Film Festival but no response was received despite the film being a major hit in France. It may have been that the government film authority which helped with entries was not at all keen on sending out a film which depicted the quotidian racism of the French middle class. The plot involves a Parisian bar owner with a roving eye and hand who takes off for his annual camping holiday, a sight beyond satire, and then rapes and murders the daughter of his best holiday friend. She's played by a young Isabelle Huppert, her first film role and gorgeous of course, though her teeth have obviously been fixed since she played this part. The blame for the atrocity is shifted onto a group of Arabs working on a building site. Chaos ensues as rough justice is handed out, including a bashing murder of one of the Arabs. The shock ending can't be revealed. Filmed with a sense of realism, it's gripping stuff and as relevant today as then. In the age of Trump any outbursts of racial violence will get attention. As for Boisset, what can you say about a solid commercial career of which basically either none or at most very few ever arrived on these shores at any venue or event. Or did I miss something... 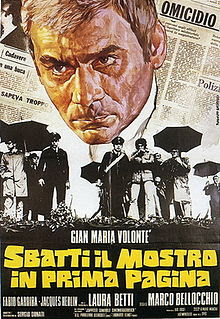 Sbatti il mostro in prima pagina/ Slap the Monster on Page One (Marco Bellocchio, Italy, 1972, written by Sergio Donati, Goffredo Fofi)
There is little to compare for sudden impact in the Italian cinema with those two early Bellocchio movies Fists in the Pocket and China is Near. Those films were ferocious in pulling apart first the dysfunctional Italian upper middle family and second the banalities and self-regard of the Italian left,  Slap the Monster on Page One  is another film that might be a useful reference point in the age of Trump,with its modern predecessors the age of Fox News, Dick Cheney, Donald Rumsfeld right through to Breitbart and as of yesterday someone unknown to me till then called Sean Spicer. Sean's going to  be a lot of fun before Trump sacks him because he'll be blamed for not getting the message across. I expect that somewhere between 3 and 6 months from now.

In its 1972 Italian manifestation, the great man Gian Maria Volonte plays a manipulative newspaper editor who manages to get the population riled up against an innocent student accused of murder. Its all part of the foul plans to get the Christian Democrats re-elected yet again but nothing stands in his way. Bellocchio marches through the material in a  way that  suggests this is a movie for Italians to savour while the rest of us scratch our head at the wrangling of the forces of the state - police, the wealthy, the right wing intelligentsia.... Cop that. Bellocchio eventually calmed down and returned to his theme of family dysfunction and has made some of the iciest parables dissecting modern Italy. You can find his films on DVD and whomever produces them seems to understand that putting some English subtitles on helps get the word out.