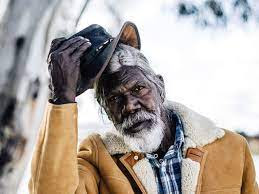 Molly Reynolds documentary on the life and near to death of Indigenous actor David Gulpilil seems to be a surprise hit. It’s also probably a certainty for any best documentary awards going round this year, an ironic situation for the fact that recognising Reynolds’ work as a documentary film-maker should have happened several years ago when she released her previous film Another Country. Still, bye the bye…

My Name is Gulpilil starts from a massive residue of affection for an actor who has been at it now for fifty plus years, beginning all the way back when the Brit Nicholas Roeg brought himself out here to make Walkabout. Gulpilil’s presence was basically the only human Australian element in the movie.

But now he’s sick, living away from his homeland, cared for by a truly saintly woman named Mary and he has been encouraged by Reynolds to give one last performance. On the way we are taken through his key roles and learn a little more about his life including the addiction and drinking problems and the occasional descent into complete poverty.

A couple of things shine through. It took Gulpilil some thirty years before, thanks to Rolf de Heer, he was cast as the lead in a movie. That was The Tracker  made in 2002 and which won a host of awards including a sweep for Gulpilil in the AFI, FCCA and IF Awards for Best Actor.

What comes through from Molly Reynolds’ gentle probing is how all of Gulpilil’s key roles derive from some lived experience. He has no need of method acting to know about being an outsider, a criminal, a wanted man, an addict, an Indigenous man affected by casual and systemic racism in his own country. He’s lived it all.

Molly Reynolds has captured it all too. Engrossing film-making.

...and, it having been unearthed presumably from the NFSA's holdings, surely Gulpilil's  one man cabaret show, excerpts from which are included throughout the new film, crudely filmed as it apparently was, deserves another run somewhere maybe like NITV. It seems to already be an extraordinarily precious bit of the national heritage that should be screened much more.