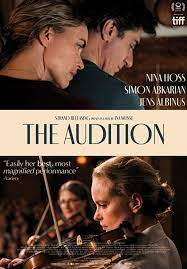 Failed Berlin violinist Hoss is now teaching and, when the faculty vote is divided, she takes on her academy’s work with young Ilja Monti.

We get a few clues as to why Nina is so strung out compulsive when we see her own Papa punish grandson Serafin Mishiev by jamming his hand into the ant bed he was casually disturbing. The wannabe vegetarian kid is not having it easy, being made to take back the fish he’s rescued to swim in the bath, to the river where anglers are barbecuing them and having mum correct his bowing over the objections of his cream pastry eating instructor. He finally revolts against his mother’s obsession with his training and we get a glimpse him playing hockey.

Things are not going all that well with Hoss’ violin maker husband Simon Abkarian so maybe it’s just as well she’s getting some on the side with one of her colleagues. The film’s most interesting passage is when Abkarian takes young Mishiev to the timber yard and shows him how to choose wood for instruments.

Hoss’ failure with the friend’s quintet comes as she drives Monti beyond endurance and with her family problems. The film’s set piece is her having him repeat the same phrase over and over while she adjusts his posture and taps out the rhythm with a pencil. Someone without classical music training won’t have the slightest idea of what she’s striving for.

To give Nina the credit she deserves for the performance, an uninformed viewer will think she fits right in with the professional musicians.  She has made two features and three TV series since.

The film is short on locating scenics throwing even more pressure on the intense performances. Film craft is excellent. In favour of Das Vorspiel,it doesn’t provide a facile insight resolving everyone’s problems and against it we don’t get any kind of insight and that leaves us wondering what if anything the filmmaker is saying. 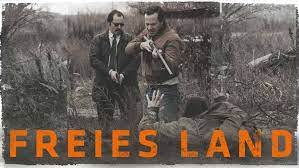 Christian Alvart’s  Freies Land/Free Country is a German version of the Spanish La Isla minima which has picked up a following in Europe since it’s 2014 release. Watching the plot develop with the contrasting cop duo investigating the disappearance of local school girls in a backward rural area, I suddenly also realised it’s commonality with Anubhav Sinha's  excellent 2019 Indian film Article 15.

Freies Land is set in 1992 Mecklenburg-Vorpommern, in former East Germany and one of the film’s dynamics is showing the run down district as another bleak marshland with isolated industrial features. It’s drab fun fair, a fake psychic, businesses like Alma’s Fischfarm, the highway captured by Taras Miskiv’s aerial camera or a climax at their sewage treatment plant, all setting up this as somewhere from which to escape.

The film kicks off with big city cop Trystan Pütter (Toni Erdman) at the wheel of his Benz (the locals have traded their Trabis for Golfs) going into the ditch to avoid a spotted cow on the highway. When a workmen’s truck passes he gets a lift and discovers his Hotel Fortschritt room has been let and he has to share a bed with his new partner Felix Kramer, who takes him for an intruder.  “I never saw a police fight that bad.”

Even more than the original, the difference in skills and methods of the two police visitors is central to the development. “Never send me out of the room again.”

The Spanish plot of the older partner’s background in suppressing dissent is inverted here. Meanwhile Pütter is getting ‘phone calls from his pregnant wife while Kramer is secretly peeing blood.

Not above tapping a victim’s phone, ex-GDR Stasi man Kramer bullies the school mates into revealing information on the two missing girls. The partners follow and rough up moto rider boyfriend Ludwig Simon, now with Alva Schäfer another school girl, under his influence.

The tabloid reporter, warned off the site of the grisly crime scene, protests that under the new regime, they have freedom of expression. The leads find themselves allying with anti-social elements like him or the poacher rather than the local coppers and we get the sub-plot of the fishermen “There’s a man with a rifle wants to see you.”

Transplanting some of the details of the original works nicely - the travel brochures, here elaborated with the pocket scenics viewer, introduce the plot of victim’s mother Nora von Waldstätten coming to realise “My dreams killed my daughter.” On the other hand repeating material like the unconnected strike just stretches the running time to give a sluggish pace closer to a streamed series.  The piece has a Germanic over emphasis - Kramer smelling the hand he has shaken with the industrialist, when we’ve been told repeatedly the killer was perfumed.

The film manages striking images, the walking girl illuminated in the red tail light, the crow which may be an illusion or the incriminating photo where the flash eliminates the mirror reflection. Director-cameraman Alvart opts for dim and colour reduced images and again we have sustained notes as music, with the odd dog bark. The film throws in disturbingly ultra-sadistic detail but the handling is good and the unfamiliar setting is developed arrestingly. This one is worth investigating.