DISTANT SHORES CONFERENCE - Stephen Morgan puts out a Call for Papers for an online conference that seeks to explore the range of international and transnational perspectives that helped shape the Australian New Wave of the 1970s and 80s. 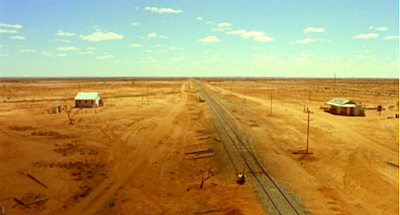 Timed to coincide with the 50th anniversary of both Wake in Fright (Kotcheff, 1971, above) and Walkabout (Roeg, 1971) appearing in London cinemas on the same weekend, this two-day online conference seeks to explore the range of international and transnational perspectives that helped shape the Australian New Wave of the 1970s and 80s.

Coming after a prolonged period of production ‘drought’, the Australian New Wave has typically been framed via the rhetoric of cultural nationalism, and celebrated for its articulation of a range of ideas, histories, and narratives about the Australian nation. Although there have been occasional efforts to address the New Australian Cinema’s place within global networks – either directly (Lewis, 1987; Macfarlane and Mayer, 1992) or as minor components of recent transnational re-examinations (Danks and Verevis, 2010; Khoo, Smaill and Yue, 2013; Davis, Gibson and Moore, 2014; Danks, Gaunson and Kunze, 2018) – the dominance of parochial approaches have often served to obscure the many international dimensions that drove Australian film production in the 1970s and ‘80s, from international funding models and co-productions, to imported stars and the significance of international circulation and reception.

As Tom O’Regan remarked in his landmark work Australian National Cinema: ‘If national cinemas are implicated internationally, Australian cinema has been remarkably implicated.’ (1996, 51). Building on those implications, this conference seeks to address the inherently international and transnational nature of the Australian New Wave, and we welcome proposals that draw upon a wide range of historical and/or methodological approaches to Australian cinema and film culture between 1965 and 1985.

Topics may include, but are not limited to:

Proposals for individual papers (15-20 minutes) are welcome, and should include an abstract outlining your paper (max. 300 words), and a short author biography (100 words). The organisers are also planning an edited collection based on the conference themes, so please indicate if you would be interested in contributing.

Please send proposals (or any queries) to the conference team via: distantshoresconference@gmail.com