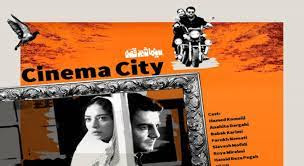 Aliakbar Heydari & Keivan Alimohammadi’s  Cinema Shahr-E Gheseh/Cinema City featuring a referencing of Persian film history looked the most likely of the entries in the 9th Iranian Film Festival just past.

In this one we follow Afshin Hashemi as Davoud, the projector repairman being pressured by his comic parents to start a family. He becomes smitten by a herbalist’s daughter when she interrupts her phone call long enough to prompt him that it’s lavender he’s come to the shop to buy.

The road to romance is bumpy as her father regards movies as sinful. There’s also the matter of marrying off the older sister before our hero’s intended becomes available. It leads to comic misunderstanding between the two families until Davoud’s chum takes the girl on, winning the father over by scrubbing his back in the steam room.

Despite their differences, the central couple produce a baby. The lead’s been rejected for military service for flat feet but he gets to do a cinema maintenance visit to the front line in the Iran-Iraq war and there's the business of reconciling both father and daughter to our hero’s outlook. Its all punctuated by montages mainly of close-ups from old Academy frame Farsi films which precede our knowledge of Iranian Cinema.

The victorious 1979 Islamic Revolution against the Shah forbids film showings and decrees the destruction of cinemas. Our hero aids the storage of clandestine print holdings, becoming part of a network doing secret backyard shows. These were apparently a significant feature of Iranian life.

There’s one scene which drew gasps from the Dendy audience. One collection of rare film prints is emptied out of their cans into a mound of spilled celluloid and set on fire. They have to add digital flames because cellulose acetate doesn’t burn that way. Film makers are bad at staging movie fires – think of The Artist.

Now if this sound like a coherent plot line and narrative development, that’s misleading. Outside viewers have to prize the information out of abrupt transitions, the unaccounted appearance, aging and vanishing of characters and a setting which gives minimal reference to any time scale.

We do get a few glimpses of Iranian life - cockfighting, the sister’s wedding, the bath house or an unconvincing Islamic street market with photos of Ayatollah Khomeini and headscarves for sale. The lead couple ride pillion on his motorbike. The herbalist finds running a tea cafe where men play cards more profitable than his old trade. The war with Sadam Hussein does unite the population.

Embedded in all this is a quite perceptive take on the place of cinema in society. The lead only has screen romance as a reference for his courting. He is an admirer of Bollywood while his intended is a Sohrab Shahid-Saless (Still Life) fan. Shahid-Saless and Abbas Kiarostami become points of reference. It looks like the leads having a child will depend on Davoud staying awake during one of the master’s films. Neither of the couple can relate to the mindless then-new contemporary Iranian TV and movies while her father considers the process itself and its application inherently evil.

It’s not hard to find similar attitudes and divisions among people around us here.

Though the film making is rough and its attempts at character development crude, for an outsider, Cinema City does remain an interesting take on Iranian life.