This film needs no introduction and as it works on so many levels, this last repeat viewing did not diminish its aura from my viewing of it during my film school years.

I happen to have read “The Invention of Morel” (1941) by Argentine writer, Aldolfo Bioy Casares, - of which Alain Robbe-Grillet’s screenplay of this film was based - when I was in Paris two years ago. It was my first time reading anything of Bioy's but I've been a big reader of Borges for many years now. It was through a third Argentinian writer, Alberto Manguel, whose book “A Reading Diary: A Year of Favourite Books” I was reading at the time, that had Morel as the first on the list. I was thus introduced and I subsequently found out that Bioy was a great friend of Borges and husband of the writer, artist and poet, Silvina Ocampo. She in turn, was the sister of the brilliant Victoria Ocampo, a hugely influential intellectual and publisher of the literary journal Sur.

On the surface, the book and the film operate on a different plane. The book’s revelation of the cinematic apparatus reduces, or rather captures the narrator’s object of desire, Faustine, as an irreducible image. I am no Lacanian, but of course, the narrative reads well on that level, that of a symbolic projection, a system of signs. Resnais’ film, on the other hand, meditates on the unequivocal and perhaps non-traversable crystalline time-image of Deleuze.

There, characters, images, stories, space, and time bifurcates. You are trapped in the ‘last year’ as repeatable instances that are nonetheless different each time it falls back on itself.

We don’t need to understand or decipher it - the film’s beauty is in its enigmatic nature. And to reduce it to the characters of X (seducer) and A (the woman) who were intimate ‘last year’, which led ultimately to his taking her life, would be to fixate the narrative on the grounds of decipherable logic; (not to mention the temporal intrusions by M).

By making sense of the story it restricts the film’s ability to bifurcate; and this shouldn’t be the case especially when the whole idea of the cinematic medium is to contradict, manufacture, or re-invent the temporal-logic driven confines of the real world. I would argue that a fan’s attempt ‘decipher’ Mulholland Drive(David Lynch, 2001) could only succumb to an alternate act of invention.

This all makes me think of a scene in Woody Allen’s Manhattan Murder Mystery(1993) where Allen’s character reminded Diane Keaton’s character that he took her to see Marienbad for their first date. Her retort was excellent - that she had to spend the next six months explaining to him what the film meant. They too, were stuck in the past of Marienbad. 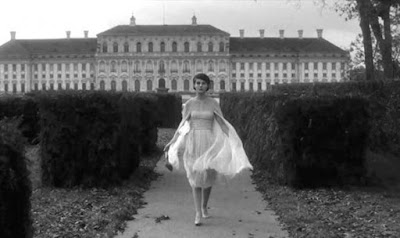 Delphine Seyrig’s dresses (above) with lace and plumes (she was dressed by Chanel after all), her earrings, eye make up and coiffure were extremely stylised and unforgettable. The black and white cinematography of Sacha Vierny, (people who are like dotted shadows in the formal Frederiksbag topiary gardens, but are in fact shadow-less images of themselves - the shadows were painted on afterwards) was also very fine.

Marienbad remains in a temporal suspension and holds up even after 60 years since it was released, as a luminous example of the French New Wave.