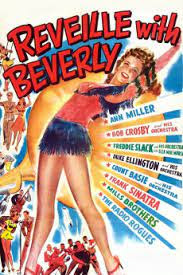 Just watched Charles Barton’s 1943 Reveille with Beverly. Breezy and lightweight this one fills time agreeably as a kind of cut price addition to the This Is The Army, Thousands Cheer cycle of WW2 service musicals. You could consider it to be slight to the point of insignificance.

However, like a lot of popular cinema, it is more revealing than the serious movies which normally get scrutiny. Eighty years after it was made, it has all manner of resonance. WW2 is foregrounded. Star, winningly teenaged Anne Miller’s brother Larry Parks, is in uniform. Her sister Adele Mara is a munitions worker and her dad Douglas Leavitt an air raid warden. She takes suitor William Wright for a walk in the family victory garden.  Chocolate heir Wright and his chauffeur Dick Purcell cheerfully accept the draft, throwing up a “Two Gentlemen of Verona” plot which no one takes much notice of.

The intrigue has radio station KFEL Wartime switchboard operator Miller ousting classical musical devotee Franklin Pangborn from his “Symphony in the Morning” spot to do her “Reveille with Beverly” swing hits program, which draws waves of fan mail from the servicemen in training round the country.

This is already the aggressive assertion of American culture which we find in the Hollywood films of the day – Mickey Rooney assuring Charles Winninger “Beethoven, Brahms - George Gershwin  is as good as those guys and he’s American” in the 1939 Babes in Arms or Donald O’Connor’s teen musical replacing the school production of “Antigone” in 1943’s Mr. Big, all leading to the delirious heights of Fred Astaire in the 1953 The Bandwagon rejecting Jack Buchanan’s preposterous "Oedipus Rex" for the Broadway musical Oscar Levant and Nanette Fabray have concocted.

This was the real cultural front line in post war Australia, though it barely registered in centres like the ABC or a Sydney University embracing the arrival of espresso and sub-titled movies, as recorded in Ladies in Black.

Reveille with Beverley was very much a recruiting tool. The troops never seem to do any military training, spending their time lazing about listening to Miller’s program and dashing off to mess call. There are none of the bullying NCOs of the Bob Hope or Abbot & Costello movies. They march off to war, like those in This is the Army, almost as an afterthought.

While the musical numbers that we iris into, as Miller spins their disks for her program, feature a substantial proportion of black artists, there are no black faces among the recruits, a point registering strikingly when the impressionists “The Radio Rogues” include "Amos and Andy" in their routine - white men playing white men playing black men in a way that would be castigated in the seventies.

The film anticipates the rock musicals of a decade later, now studied as showcasing the popular music of the day. It fields a performer roster that can hold its own with most more substantial productions. The Mills Brothers doing “Cielito Lindo” and “Sweet Lucy Brown”, Bob Crosby’s “Big Noise from Winnetka’, Count Basie on “One O'Clock Jump”, Duke Ellington and “Take the 'A' Train”, Freddie Slack on “Cow-Cow Boogie” with an Ella Mae Morse vocal, Frank Sinatra in a grotesque staging of “Night and Day” all female pianists and violin players. The Radio Rogues perform “Wabash Moon” & “When the Moon Comes Over the Mountain.”

It’s not till the film is nearly over that Ann Miller gets into her net stockings for her “Thumbs Up and V for Victory” dance number.

Director Charles Barton (Broderick Crawford’s off-sider in the Wellman Beau Geste) was one of the most accomplished in this field. He did the best of the Abbot & Costello films and, if Universal had trusted him with Hellzapoppin’, instead of taking on lumpen A feature blow-in H.C. Potter, that could have been an even more substantial achievement. Barton keeps the piece moving nicely, coasting over the unfunny comedy with Andrew Tombes and Doodles Weaver and getting the most out of the slim plot. No dance director is credited, though Ann Miller’s big number involves considerable choreography. Duke Ellington's jitterbug dancers could stand more prominence.

All in all, Reveille with Beverly is better and more revealing viewing than other ambitious films of its day. I certainly enjoyed it more than watching Paul Muni in the John Farrow-Irwin Shaw Commandoes Strike at Dawn or Cornel Wilde being Chopin in Charles Vidor’s Song to Remember.