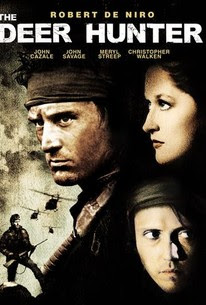 Editor's Note: Michael Cimino's still-controversial The Deer Hunter was recently given the full restoration treatment to coincide with the 40th anniversary of its release back in 1978. The magnificent new 4K digital copy had its premiere at Bologna's Il Cinema Ritrovato in June and a screening was also arranged recently for Cinema Reborn  subscribers. These notes were prepared for that screening by Variety critic Eddie Cockrell. Controversy still haunts the film, and Cimino himself,  as can be seen from this piece in Bright Lights, Gary Morris's great online film journal.

The 40th Anniversary restoration has now been released on Blu-ray and DVD in Australia.

Michael Cimino was scarcely a blip on Hollywood’s radar prior to this film's release. A Yale graduate who made his name directing popular television commercials in New York before moving to Hollywood to write for films, he had but one directorial credit under his belt prior to THE DEER HUNTER, the successful caper film THUNDERBOLT AND LIGHTFOOT. This break came courtesy of co-star and producer Clint Eastwood, who was so impressed with Cimino he gave him the gig. And whilst it showcased a relaxed banter between Eastwood and Jeff Bridges (who received an Oscar nomination in support), it scarcely anticipated the magnificent ensemble work and probing character studies Cimino drew from his DEER HUNTER cast.
Cimino quickly gained a reputation for meticulous production design, extended shooting schedules and generally difficult behaviour. It culminated with the disastrous 1980 western drama HEAVEN’S GATE, a financial disaster that brought down the United Artists studio and is seen as the end of the director-driven New Hollywood era of the 1970s. It was an experience from which Cimino and his career seemingly never recovered.
Though that film has undergone a critical re-evaluation, it made a pariah of the director, whose increasingly eccentric behaviour and startling physical transformation rendered him the stuff of rumour, insinuation and reclusive legendary status prior to his sudden, lonely and mysterious death (eventually ruled as congestive heart failure) in his Beverly Hills mansion in July 2016.
What do these chequered person details have to do with THE DEER HUNTER? Nothing and everything: in spite of, or maybe due to, the way in which he conducted his career, when all is said and done, Cimino was an artist. A difficult and eccentric artist, to be sure, but his legacy, which began, and some say ended, here, speaks for itself.

In the 1970s, particularly the three-plus years between America’s ignominious retreat from Saigon on April 30, 1975 (and, by extension, the ill-fated war with North Vietnam), and the seismic Los Angeles release of director Michael Cimino’s THE DEER HUNTER on December 8, 1978, Hollywood had sporadically and uncertainly grappled with the question of how to portray the extended, increasingly unpopular Vietnam conflict on film.
Such ventures as ROLLING THUNDER, ZEBRA FORCE, THE BOYS IN COMPANY C and GO TELL THE SPARTANS (look ‘em up, watch ‘em) opted for either exploitation, patriotism or an uneasy combination of the two.
With the passage of time, the best of the bunch seem to be Peter Davis’ 1974 Oscar-winning documentary Hearts and Minds, émigré Karel Reisz’ 1978 drama WHO’LL STOP THE RAIN (which opened four months prior to THE DEER HUNTER), Hal Ashby’s COMING HOME (which opened two months before Cimino’s film and subsequently shared to Oscar stage with it) and, wait for it, Robert Altman’s 1970 war satire M*A*S*H, which used the early 1950s Korean conflict as a thinly-disguised pretext to present some emerging and distinctly 1970s anti-war sentiments.

Given this relatively lacklustre track record, particularly in the context of Americans’ deep age and class divisions over the war, the anticipation in advance of THE DEER HUNTER’s release was keen. Amping up the must-see factor even further was the film’s controversial selection in the competition section at the Berlin International Film Festival in February 1979 and the subsequent Eastern Bloc walkout from the Berlinale in protest. The Soviets accused the film and its makers of “insulting the heroic people of Vietnam.”
The deceptively simple logline for Cimino’s film is this: three working-class friends (played by Robert De Niro, Christopher Walken and John Savage) attend one last small-town Russian Orthodox wedding and a sloppy yet joyous wedding reception with their mates before shipping off to Vietnam, where they are captured and tortured, being forced to play rounds of Russian Roulette. Two of the three return to America, with one journeying back to save the third, who has chosen to remain behind in Saigon to play the awful game for what passes for a living.
Though there were pitched battles between the director and screenwriter Deric Washburn over credit, the writer, who had previously collaborated with Cimino and the recently deceased Peter Bochco, subsequent creator of TV’s “Hill Street Blues”, on the script of Douglas Trumbull’s SILENT RUNNING, won sole credit after arbitration.
In the hands of Cimino and his collaborators THE DEER HUNTER is, as more perceptive critics pointed out at the time and which remains true today, a symphony in three movements. The hardscrabble yet tight-knit domestic life of the proud immigrants and their descendants yields to the chaos and horror of war, which in turn gives way to the profound changes in the men, the communities to which they return and to everyone’s lives moving forward. Through it all is the stoic resolve of De Niro’s Mike Vronsky, whose obsessive pursuit of the title endeavour gives the film a rich metaphorical theme.
This 4K restoration of THE DEER HUNTER showcases the gritty yet gorgeous cinematography of the great Vilmos Zsigmond on a variety of locations. Eight towns in Pennsylvania, West Virginia, Ohio and Washington state were used to flesh out the real Clairton, Pennsylvania on the Monongahela River south of Pittsburgh where the domestic scenes are set, with Bangkok and environs filling in for Vietnam. Note the shafts of sunlight during the wedding sequence, the mist-shrouded mountains and the lush Thai jungles (no sets were built in either country).
The Oscar eluded Zsigmond that year, going instead to Nestor Almendros for Terrence Malick’s DAYS OF HEAVEN. Compensating for that, Peter Zinner’s Academy Award for Film Editing underscores the intuitive ways in which Cimino and Zsigmond framed and shot the pivotal scenes of male camaraderie at home and the chaotic press of humanity in the Russian Roulette sequences. Finally, note also how time seems suspended throughout the film, subtly underscoring the selfless dedication to the night-shift nature of their work and the immersive hell of war.
Also winning an Oscar in support for the film was Walken, whose performance as Nikanor “Nick” Chevotarevich embodied the profound ways in which war changes people. The performance cemented his status as the go-to actor of his generation for characters under duress.
On a darker note, the film featured the final performance of the great John Cazale (DOG DAY AFTERNOON, the first two GODFATHER films), who succumbed to the cancer he fought before and during production—his scenes were shot first and Cazale never saw the finished work. (Meryl Streep was living with Cazale at the time, and took the role, which she and Cimino fleshed out to accommodate her, to be closer to him).
Does THE DEER HUNTER have problems exacerbated by the times in which it was made? Yes, but let’s not go there—with this or any film, though that’s another essay altogether (and a long one). What stands the clichéd “test of time” (as George Stevens Jr. used to intone when bestowing an American Film Institute Life Achievement Award) in THE DEER HUNTER is what made Cimino great, and also what began his road to pariah-dom: grand ambition, meticulous attention to detail, a remarkable facility with ensemble male bonding and, at least here, a profound and profoundly conflicted love of what the banner at the wedding reception in the first third of the film somewhat ironically proclaims as “SERVING GOD AN COUNTRY PROUDLY.”
The film also served to break up the logjam of conflicting intentions Hollywood had shown over films about the Vietnam conflict, and they came thick and fast after that: APOCALYPSE NOW, PLATOON, BORN ON THE FOURTH OF JULY, FULL METAL JACKET and others. THE DEER HUNTER is where it all began, the wellspring of America and its filmed entertainment industry’s engagement with the enemy that was, in the end, perhaps itself.

The fortieth anniversary restoration  screened at AFTRS and presented by Cinema Reborn, premiered at Bologna’s Il Cinema Ritrovato in June of this year is now available on Blu-ray and DVD. Restored in 4K in 2018 by Studio Canal at Silver Salt laboratory from the original 35mm camera negative