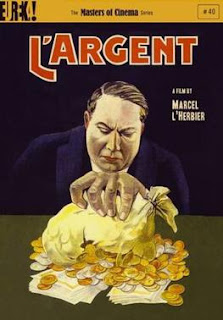 Many years ago, in the 1970s, when I was at university, the French department within the faculty of Arts, was even then a focus of the study of film and in particular French film. It strikes me now as something worth remembering that for the genuine solitary film lover, getting to see, for example, a silent film, or indeed pretty much any film, was extremely difficult, simply because film stock was either not available or prohibitively expensive. How easily we have all been lulled into forgetfulness with the ready availability of DVDs and streaming.

Without having specific knowledge, I imagine the French cultural attaché at the time made film and television programmes available, of course, in French to the French Department. It was in the context of television that I began to become aware of Marcel L’Herbier and this seemed to be largely a reflection of much greater interest shown to Abel Gance. 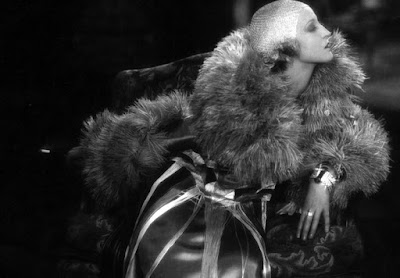 L’Herbier had for about the previous 20 years made various series of television programmes, mainly, but not exclusively about cinema. In this sense he was perceived largely as a public intellectual. My French was and remains completely insufficient to comment directly on these television programmes, but my memory is quite clear that he was highly regarded for these, whereas his films were, in the main, if not ignored completely, then certainly not particularly highly regarded. I do note however that some people who had access to the films, were in the process of reevaluating him. I might also guess that, only 30 years after the end of World War II, M. L’Herbier and his continuing role in the industry during the period of the Occupation, may be perceived as creating difficulties.

L’Argent  is an updated version of the novel by Emile Zola. The storyline is moved from the decadence of the second French Empire to the 1920s. The novel is one of a long series by Zola which trace a series of people who are all connected by family or business et cetera. In the novel the central character is Saccard and, by way of example, the following novel is about his brother, a minister in government. Originally published in serial form, it and the others in the series constitute essentially "tripledeckers" in terms of length and are quite similar to the works of Dickens in terms of length and form of production. Zola was a lifelong Republican and viewed with enormous distaste the gaming and corruption under Napoleon III.

When the film was premiered, it received substantial criticism for the updating. I think in this instance that criticism is justified because the nature of legal and social mores under the Second Empire was much more loose than in the 1920s. In other words, the updating is not tied into a foundational situation quite so well. But I think the criticism at the time was more concerned with the simple fact of updating a "classic". I think on upon reflection that that sort of criticism is much more to be found in relation to the French language than elsewhere and it doesn't just apply to Zola.

I have managed to see the full reconstructed version, I believe as intended by the director. But it was not this version which was premiered. Unbeknown to L’Herbier, his co-producer cut out about 20 minutes of the proposed 200-minute production. The film is in two parts, and I presume that the cuts were made in part two which does move with rather less precision and activity than part one. That said, I now believe it to be an absolute masterpiece - the general view since about the late 1970s. 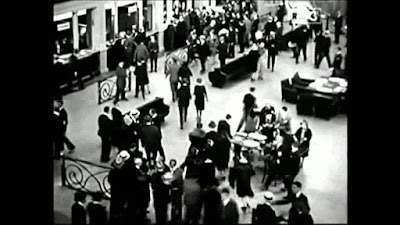 The director manages a number of set pieces of quite vast scale, most especially the banking Chambers of the rivals Saccard and Gunderman and the main reception room of Saccard's home. There are other sequences which are intense but not on the same physical scale. Notably, there are quite masterly shots taken in the Paris stock exchange, the Bourse which was given over to director the period of three days. All of these show a magnificent capacity to deal with a very, very large number of extras and also to make use of the complete fluidity and movement then possible with a silent movie camera. It is this fluidity and pace which is most noticeable in the film.

The director obtains from all his actors completely believable and subtle performances. His troupe of actors show all the finesse of late period silent acting: subtle, restrained and yet with complete conviction. When I think about it many silent films of this very end of the silent age, are ignored because sound is so much more readily capable of conviction. But just like late period Griffith, the director manages his mise-en-scenewithout any requirement for sound. The camera effects and marshalling of crowd scenes are just so convincing that one ignores the effort that was obviously required.

At the original screening recordings were played of the sounds produced at, for example, the airport (aero engines) and activity at the stock exchange. I don't know whether these were included in the screening I saw, and I was simply so engrossed I was not able to mentally withdraw and analyse this.

It's a great pity that this stunning piece of art did not come to my attention in this form many, many years previously.
Posted by Film Alert 101 at 03:59