The Animatograph hits Australia! - Ian Christie discovers the archaeology of the Cinema in Australia

Working on my long-promised book about the slightly mysterious founder of British cinema, Robert Paul, has given me a chance to revisit some of the great stories that emerged from the earliest months of showing moving pictures around the world. One of the best of these is a story about how the international magician Carl Hertz took one of the very first projectors all the way from London to Melbourne in the summer of 1896.
Hertz, who billed himself ‘the Modern Mystery Merchant’, was a determined American, intent on getting hold of this new-fangled gadget while passing through London. The Lumières’ Cinématographe wasn’t yet for sale, but the British electrical engineer Robert Paul was selling his Animatograph – except he only had two working machines, and a nightly slot in the programme of one of London’s premier music halls, the Alhambra in Leicester Square. Hertz laid siege to the novice showman, calling on him every night and upping the offer.
On the Friday before he was due to sail, Hertz decided on direct action. As he later told the story, ‘So we went back to the Alhambra, where he took me onto the stage and showed me the whole working of the machine… We were there for over an hour, during which I kept pressing him… Finally, I said: “Look here! I am going to take one of the machines with me now.” With that I took out £100 in notes, put them in his hand, got a screwdriver, and almost before he knew it, I had one of the machines unscrewed from the floor of the stage and onto a four-wheeler. The next day I sailed for South Africa.’
Hertz’s bold move had several once consequences. One was that it forced Paul to work right through the weekend, to produce a new standby projector. And in the process, he introduced an improvement, which made feeding in the very short films of this period much easier. But But Hertz now found himself literally at sea, with a machine that he had little idea how to operate. Apparently the ship’s engineer came to his rescue, and enabled the ‘mystery merchant’ to present what must have been the very first film show at sea, probably on 31 March 1896.
Three weeks later, Hertz had reached Johannesburg, to start a one month engagement at the Empire Theatre of Varieties, which soon included the films he had brought, along with several that must have been sent to him by Paul – one of these being Britain’s very first fiction subject, The Soldier’s Courtship, filmed on the roof of the Alhambra with members of the dance troupe. This was long believed lost, like the majority of Paul’s films, but has recently been restored by the Italian film archive, and turns out to be unexpectedly polished, and funny. Longer and distinctly more dramatic than anything produced by the Lumières or Edison.
After a whirlwind tour through Pretoria, Bloemfontein, Kimberley, Durban, Maritzburg, East London, Kingwilliamstown, Grahamstown, Port Elizabeth and Cape Town, Hertz set sail for Australia on 20 July and reached Melbourne on 11 August. This was towards the end of the ‘marvellous Melbourne’ era, when the city was at the peak of its social and economic success. Hertz was on his second visit to Australia and booked to open at Harry Rickards’ rather rickety old Opera House on Saturday 15 August, but kept his new attraction secret. Then, on the following Monday, at a special midnight session after the normal evening performance, Melbourne’s theatre world was treated to the country’s first screening. The Melbourne Herald account is worth quoting at length: It was after the opera was over. The occupants of the galleries had clattered noisily downstairs, the pit and stalls had cleared, demurely, and the crutch and toothpick dress circle had quitted, talking of oysters at Madame’s….And then, as if by magic as wonderful as any of Mr Carl Hertz’s clever illusions, stalls and dress circle filled up again…

The audience, there by special invitation to witness Mr Carl Hertz’s new illusion, the Cinematographe, was a highly critical one. It consisted of all the members of Mr Rickards’ Melbourne company, and of many other clever artists now in the city… And they did not spare Mr Rickards, Mr Hertz or the leader of the orchestra…
The ringing up of the curtain, however, showed that actors can teach a useful lesson to certain classes of theatre goers. The audience became quite silent and attentive, breaking out into loud applause as Mr Hertz brought out pretty and laughable and wonderfully interesting scenes.

In principle, it is the kinetoscope of Mr Edison. In practice, it is a marvellous improvement upon it. Life-size figures and pictures, true to nature, are shown upon the canvas. A couple of scenes from a comical Trilby called forth much laughter, and scenes of London streets and bridges, with crowds of traffic, omnibuses moving rapidly, hansom cabs dashing speedily, fairly brought down the English part of the house
And as the orchestra played 'A Home on the Ocean Wave' the audience burst forth into general applause, and gave Mr Hertz a special call.”

Accounts of the midnight preview were widely reprinted in other Melbourne papers, and it did indeed create a sensation. When Hertz added the ‘cinematographe’ – as all moving-picture equipment tended to be called - to his public performance on the following Saturday, it became the talk of the city. On 4 September, The Sun reported that ‘no alteration of bill has been found necessary at the opera house, for as regards crowds, the cry is “still they come” to marvel over the cinematographe’. The season was extended until 17 September, after which Hertz and his wife travelled to Sydney, where they opened at another of Rickards’ theatres, the Tivoli on Pitt Street, on Saturday 19 September.
Hertz apparently had a standard press-release, sent to newspapers ahead of his appearances, which gave a mixture of factual and fanciful information about the ‘cinematographe’, as well as descriptions of the main subjects on offer. Described as ‘a combination of photography, electricity and stereopticon’, it was attributed, not inaccurately, as ‘an invention partly of Edison’s, and partly of a man named Paul’, whom Hertz located at ‘the Royal Institute in London’, before boasting that he had ‘added some improvements of my own’. Invoking ‘electricity’ was rather opportunistic, since neither Paul’s camera nor projector was electrically powered, even though Edison’s Kinetoscope had been battery-driven, and Hertz certainly wouldn’t have been able to count on a supply of what were then cumbersome batteries on his extensive travels. The attraction of busy streets in London ‘where you can see the ‘buses, cabs &c moving along as though gazing at the actual scene’ was stressed, along with key events in the English calendar – the Derby and the Oxford and Cambridge boat race – which would have appealed to many in colonial Australia. Ten years later, Charles Urban’s Living London, partially rediscovered at the Australian National Film and Sound Archive in 2006, would have the same appeal. And its success would help fund The Story of the Kelly Gang…
However, Hertz didn’t enjoy the same exclusivity in Sydney as in Melbourne. Earlier in the same month, Joseph McMahon had given the first film screening in Sydney; and on 28 September, a travelling Lumière operator, Marius Sestier, would open the ‘Salon Lumière’ with his Australian partner Walter Barnett, with much emphasis in the advertising of this as an ‘authentic Cinematographe… direct from the Lumière manufactury’. There seems to be no contemporary account of any direct comparison between Paul’s and the Lumière equipment, although some reviews emphasised the pictorial quality of the latter, and it has been suggested that because the ‘Salon’ was not a theatre, it attracted ‘a more elite patronage’, which soon included the Governor and various church dignitaries.

Sestier remained in Sydney, and began to film local subjects, as was the roving Lumière operators’ practice, before heading for Melbourne to produce his famous film of the Melbourne Cup in November, which remains one of Australia’s iconic early films. Meanwhile, Hertz finished in Sydney on 14 October, and set off on a tour around Queensland before returning to Melbourne and Sydney at the end of the year and setting sail for New Zealand in mid-February 1897. Just to read his itinerary on this tour is exhausting, and makes me wonder what state his film prints were in after such intensive use!

Most of Robert Paul’s surviving films can be found on a BFI DVD I curated a decade ago, and many have since turned up on YouTube, complete with Stephen Horne’s sympathetic accompaniment. 2019 will be the 150th anniversary of Paul’s birth, when I hope my book and various other attractions will help boost his profile. Paul stayed in the business for fifteen years and pioneered much of what we take for granted as ‘cinema’.

Ian Christie is a London-based film and media historian who curates exhibitions and teaches at Birkbeck College and for Gresham College. www.ianchristie.org. The post above was derived from research conducted for his forthcoming book provisionally called The Time Traveller: Robert Paul and the origins of British cinema, due from Chicago University Press in 2019

Streaming on the BBC (in the UK) and elsewhere - John Baxter grapples with the remake of the Powell & Pressburger classic BLACK NARCISSUS (Charlotte Bruus Christensen, UK, 2020) 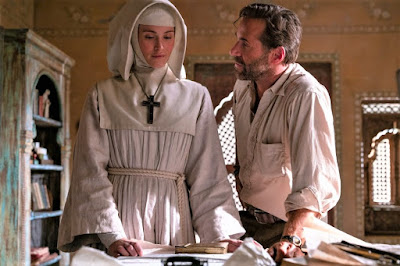